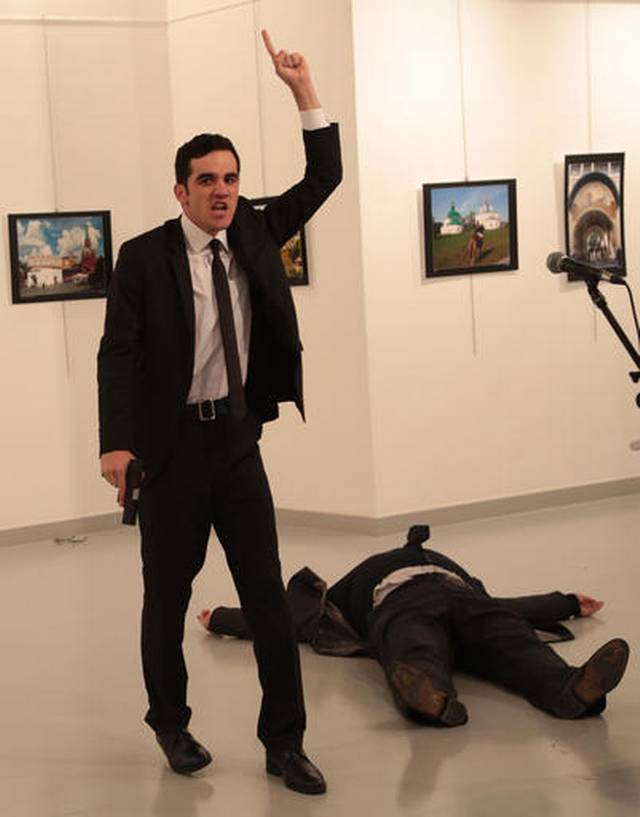 Vladimir Putin has ordered his secret services to tighten security for Russians at home and abroad.

The move comes a day after Russia’s ambassador to Turkey Andrey Karlov was shot dead by a Turkish off-duty policeman while speaking at an art gallery.

Russian news wires quoted Mr Putin as saying: “I ask the special services to take additional measures to ensure security inside Russia and outside, to raise the security of Russian institutions and employees abroad.

“And I ask you through channels of partnerships to strengthen your work with the intelligence agencies of other states.”

Moscow has already described the killing of Mr Karlov by gunman Mevlut Mert Altintas as a “terrorist act”.

Among their priorities will be trying to determine whether Altintas was a lone gunman or operating as part of a wider plot, Hurriyet newspaper reported.

Marina Karlov mourns her husband laying her head on top a flag-wrapped coffin of late Russian Ambassador to        Turkey Andrei Karlov before being carried to a plane by Turkish soldiers during a ceremony at Esenboga airport on December 20, 2016 in Ankara. Turkey. Russia’s ambassador to Turkey, Andrey Karlov, was shot dead by a Turkish policeman shouting ‘Don’t forget Aleppo! Don’t forget Syria’ at an art exhibition in the Turkish capital of Ankara yesterday.Erhan Ortac/Getty Images

Meanwhile, Mr Karlov’s body has now been returned to Russia after an official farewell ceremony at Ankara’s Esenboga airport.

Turkey’s state-run Anadolu news agency said six people had been detained in connection with the assassination.

Anadolu said Altintas’ mother, father, sister and two other relatives had been held in the western province of Aydin.

Russia Tightens Security After Shooting Of Turkish Ambassador was last modified: December 20th, 2016 by Arinze Ago