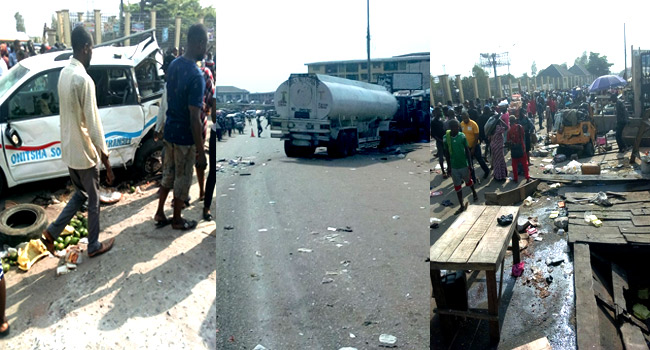 Four pupils of Ugwube primary school of Ugwube, Oba, Idemili South local government area in Anambra state, have been reportedly crushed to death by a driver along Oba/Nnewi old road.

The deceased were said to be on their way home after school hours when the driver, alleged to have suffered a brake failure, rammed into them.

The Nation gathered that four of the pupils died on the spot while over 10 of them sustained various degrees of injuries.

An eye witness said the driver of the vehicle was coming from Onitsha axis on a high speed when he suddenly had a brake failure and rammed into the pupils.

He said: “The school children came out in their large number after being dismissed at about 2pm.

“They were going down the Oba/Nnewi old road when the driver of the vehicle, infinity Jeep with registration No. MYB 22 AAA, rammed into them, killing four on the spot while over 10 of them sustained various degrees of injuries.”

It was learnt corpses of the deceased were deposited at Gateway Hospital morgue, Oba while the injured were taken to unidentified hospitals.

Two of the deceased it was also gathered, were from the same mother.

“It was an accident, the parents should take heart because it has happened,” he said.

He said the driver of the ill-fated vehicle, Mr. Chibuzor Elebo, has been arrested.

“The injured were about 10 and they have been taken to various hospitals for medical attention,” he added.