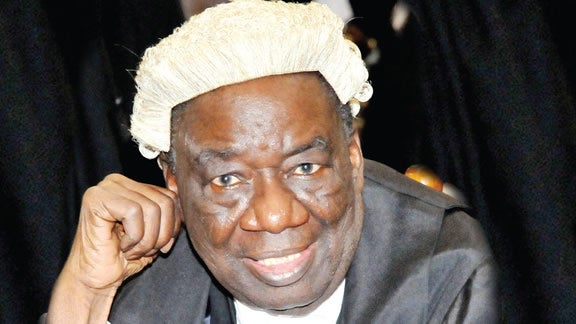 A former attorney-general of the federation (AGF), Richard Akinjide, is dead.

Akinjide, a senior advocate of Nigeria (SAN), died in Oyo state in the early hours of Tuesday after battling an unknown illness.

The former minister died at 88.

The late Akinjide was a minister of education under the Tafawa Balewa administration in the first republic.

He later became justice minister in the administration of Shehu Shagari.

Akinjide attended Oduduwa College, Ile-Ife in Osun state. He went for further studies in the UK and he was called to the English bar in 1955 and later called to the Nigerian bar.

He was a member of a sub-committee of the constitutional drafting committee of 1975. Akinjide joined the National Party of Nigeria (NPN) in 1978.

Before venturing into politics, he established his law firm, Akinjide and Co.

Why Coronavirus Is Spreading Fast Across Nigeria – Sultan of Sokoto, Muhammad Sa’ad Abubakar