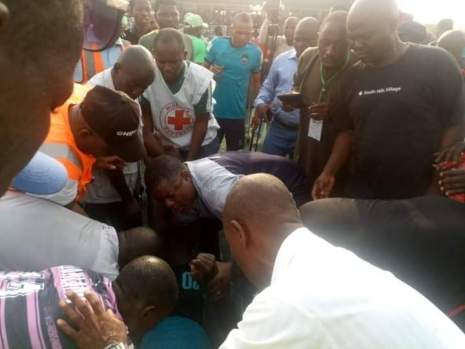 There was a tragedy in one of the Nigeria Professional Football League games on Sunday as a Nasarawa United player, Chieme Martins, slumped and died.

According to witnesses, Martins slumped after a collision with a Katsina United player, on Sunday afternoon, and efforts to revive him by the medics and subsequent rush to the hospital were unsuccessful.

The player was attended to by medics of the two clubs when he slumped and was later rushed to Dalhatu- Araf Specialist Hospital in Lafia where he was pronounced dead.

A video of his teammates crying after the unfortunate incident has since gone viral.

Nasarawa United went on to win the game 3-0 but they will be deeply pained by the irreparable loss.

In his reaction, the Chairman of the League Management Committee (LMC), Shehu Dikko, said the league regrets the passing of the young man in his prime.

“We commiserate with Nasarawa United and the immediate family of the late player,” Mr Dikko said.

The LMC expects that there would be a standard autopsy to establish the cause of the player’s death.

“It is hoped that the findings of the autopsy would inform subsequent measures if any that has not been addressed by the existing standard procedure,” the LMC chief stated.

Furthermore, the LMC will keep engaging the club and the player’s immediate family to find the best way possible to offer support in this sad moment for the family and the Nigeria football family at large, he said.