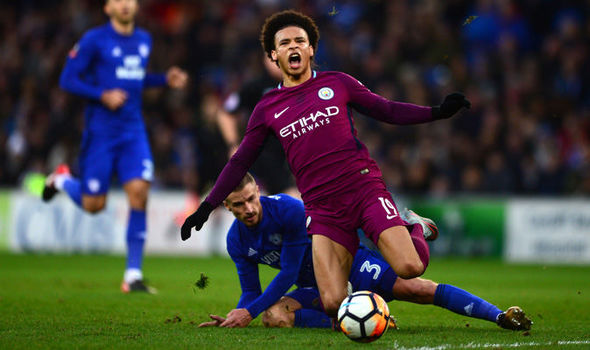 Pep Guardiola was left furious at the standard of refereeing in Manchester City’s FA Cup win as he predicted Leroy Sane would spend three weeks on the sidelines after a horror tackle.

Goals from Kevin De Bruyne and Raheem Sterling saw City safely past Cardiff City in Sunday’s fourth round match in the Welsh capital.

That victory was soured, however, by Sane’s withdrawal before half time following a nasty studs-up challenge perpetrated by Joe Bennett.

The Cardiff man, Bennett, only received a booking for the hit before later seeing red for a separate offence, and Pep – who was spotted having a heated exchange with officials at full-time – believes Lee Mason was far too lenient in his refereeing.

“I don’t understand the (Bernardo) goal that we didn’t get, but that is okay. We can accept that. But they have to protect the players,” Pep told reporters after the final whistle.

“We will see [Sane’s injury] tomorrow, he could be out for two, three, four weeks.”

Manchester City currently seats atop The EPL table with a whooping twelve gap difference between them and city rivals United who are in the second place.

You may also like: TRANSFER UPDATE: ARSENAL READY TO SELL GIROUD TO CHELSEA FOR £35M