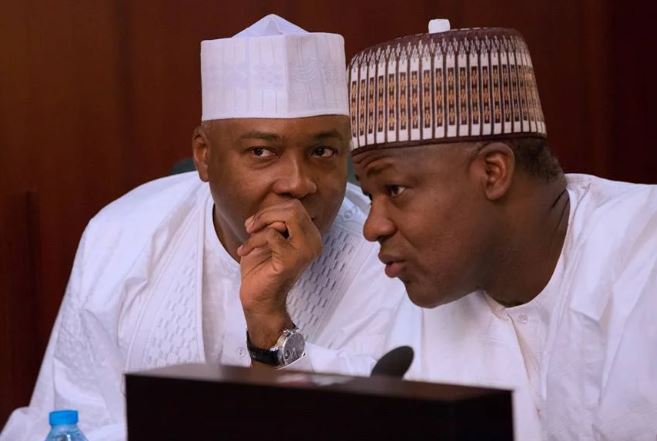 The National Leader of the All Progressives Congress, Asiwaju Bola Tinubu, on Sunday accused the President of the Senate, Bukola Saraki; and the Speaker of the House of Representatives, Yakubu Dogara, of allegedly hijacking and padding national budgets for the four years that the party had been in power.

He claimed that the two presiding officers of the National Assembly always padded the budgets with pet projects that profited them while they cut funds appropriated to projects that would have benefited Nigerians.

Tinubu made the allegations in a statement made available to journalists by his media aide, Tunde Rahman.

He was reacting to reports that he was backing some persons as leaders of the Ninth National Assembly because of his alleged interest in the 2023 presidential race.

The former Lagos State governor said rather than a future political ambition, his desire to prevent a repeat of Saraki and Dogara’s era was responsible for his support for the choice of President Muhammadu Buhari and the APC for the National Assembly leadership.

He said, “With the Senate leadership usurped by regressive elitists, that chamber constituted a brake on progress and good governance.

“The Senate leadership, and to a lesser degree, the House leadership, stymied the APC legislative initiatives while attempting to hoist noxious, reactionary and self-interested legislation on the nation.

“Just look at the way Saraki, Dogara and their ilk hijacked the budget process these past four years. National budgets were delayed and distorted as these actors repeatedly sought to pad budgets with pet projects that would profit them.

“Even worse, they cut funds intended to prosper projects that would have benefited the average person. After four years of their antics halting the progress of government, we should do all we can to prevent a repeat of their malign control of the National Assembly.

“If we are truly committed to optimal governance, then we also must be equally committed to ensuring that the National Assembly leadership be competent and experienced as well as imbued with a progressive mindset and a desire to work in close cooperation with the executive.

“This is all Asiwaju has hoped to achieve. There are no ulterior motives. Everything he has done is in concert with and in furtherance of the wishes of President Buhari and the party.

“Thus, those who cast aspersions at Asiwaju, in reality, are bucking against the stated position of the President. This is a democracy and people have the right to oppose whomever they wish to oppose.

“However, if these mongers oppose the President, let them be of sufficient courage to plainly say so. They should not disparage Asiwaju as an indirect way to contend against the President.”

Tinubu said what all those who cared about Nigeria should do was to support the President in driving to reality his economic policies and objectives.

He said it was spurious to believe that having one’s allies in the National Assembly would enhance one’s presidential ambition.

The party leader added, “In the end, the rumour-mongers should court greater discipline and wisdom. As Asiwaju recently said, there is no action a person can take that constitutes a political guarantee as to what may come four years from now.

“Moreover, that having allies in the National Assembly leadership positions will greatly enhance someone’s presidential ambitions is a spurious claim.

“In 2015, Senator Saraki finagled his way into the Senate presidency. He planted himself at the apex of legislative power. But his actions as Senate President showed a man devoid of compassion for the average Nigerian. All he cared for was power and position. Soon he will be deprived of both.

“House Speaker Dogara has fared only slightly better. Occupying these positions is not a guarantee of future success. It is only a guarantee of present duty.

READ ALSO: MAN KILLS WIFE FOR SAYING ‘SHE WOULD REMARRY IF HER HUSBAND DIES’