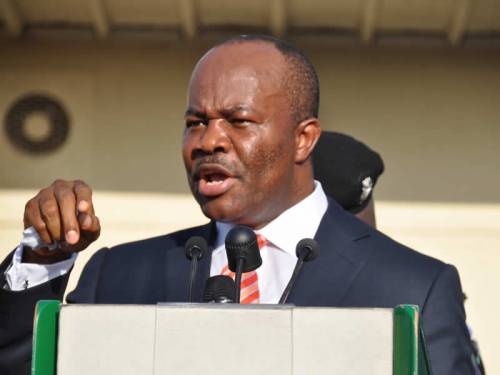 Answering questions from journalists in Abuja, Senator Akpabio who last Wednesday dumped the PDP for the APC, said he was not disturbed over calls from some quarters that his seat in the upper Chamber be declared vacant.

Akpabio, who was blocked at the foyer of the National Assembly and asked if he was perturbed about reports that his seat should be declared vacant, said, “Even as you are looking at me, do I look perturbed? I have not heard the report. Because the reason why I think that is a rumour is that there is, at the moment, no division in the APC. The APC is one family. If you hear about R-APC that was not really a political party. That was not a division, it has since been consumed in what they call Coalition of United Political Parties (CUPP). So, there is no division. And so, any defection from APC to PDP, we will like to declare those seats vacant.”

On the question that the APC National Chairman, Adams Oshiomhole had said severally that the party would get Saraki impeached and that Constitution says two-third is required to effect such an impeachment and how he has mobilized for this, Akpabio said, “I just came in from Ikot-Ekpene, where I decided with my people to join APC. I’m yet to be briefed on any of those items. I have not heard anything. What I am hearing now is what you are telling me. But why don’t you wait for me to formally talk to you? I believe that when the National Assembly resumes you will hear from me directly. So, exercise patience.”

When asked to confirm if the National Assembly will reconvene  on Wednesday, the Senator said, “I have noted all your reports. We are also in Abuja. So, thank you for the reports.”

When asked what he had found out, Akpabio said: “You are the one telling me. That’s what I’m saying.

Saraki, Kwankwaso, Others’ seat will be declared vacant – Akpabio was last modified: August 14th, 2018 by Reporter