Home Weird News Is This the Scariest House on Earth? See the Building That Has Gotten People Talking (Photos)
Weird News

Is This the Scariest House on Earth? See the Building That Has Gotten People Talking (Photos) 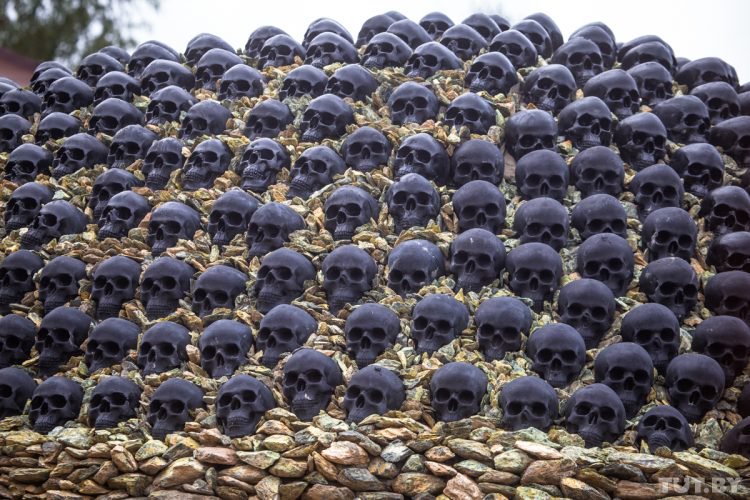 In the town of Ratomka, five kilometers from the Belorussian capital of Minsk, there is a house so spooky that some people try to avoid walking past it at all costs, especially at night. With skeletal hands coming out of the stone fence, devils decorating the roof and dozens of black skulls covering a domed structure on the property, the scariest house in Belarus is definitely a sight to behold. Photos of the spooky house in Ratomka recently went viral in Belarus, with most people praising the owner for the bold artistic design. However, the only reason that the house even became famous in the first place was because people living in its vicinity had been complaining that it is too spooky. Some of them even filed complaints to the local authorities about it, claiming that the devils and skulls were scaring children and even adults walking by after dark, but they haven’t done anything about it yet. “I photographed the house with my phone, to show it to colleagues at work, and then I deleted the photos because I didn’t want such devils in my phone’s memory,” Ratomka resident Maria Nikolaevna told TUT.by.
“From the distance, the house looked pretty, my granddaughter even compared it to a fairytale castle. But when we got closer and saw the hands coming out of the fence, and the devils on the roof, I was shocked. Now I don’t walk my granddaughter by that house anymore. At night, it’s scary even for adults, as the light reflects off those little metal devils and they look even creepier.” One of the next-door neighbors of the house also complained that the view was horrible, with all those devils dotting the roofs, and the spooky black skulls covering the domed roof of a smaller structure resembling a crypt. He even noticed that one of the devil sculptures seems to be aiming a bow directly at his window, which makes him uneasy. Neighbors say that the owner of the house is actually just an ordinary businessman. He started building the house a decade ago, but then went away for eight years and only cam back 2 years ago and resumed work on it. Now it’s almost finished, and people are scared he might add even more spooky elements to it before he’s done. Like it or not, you have to agree that the decor may actually prove to be an excellent deterrent against thieves, especially id they’re the superstitious type. I would definitely think twice before going into a place like that at night.
H/T: Oddity Central
Is This the Scariest House on Earth? See the Building That Has Gotten People Talking (Photos) was last modified: August 25th, 2017 by Arinze Ago