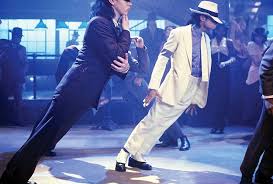 Because every time we try it, our faces meet the floor. Thank God for science.

A group of neurological surgeons have taken time off their busy schedules to give us answers to the age-old question of how Michael Jackson performed that iconic inhuman, almost-magical move where he would lean 45 degrees forward without falling.

The team discovered the trick, thanks to a patent registered under Michael Jackson’s name.

The King of Pop would wear a specially designed pair of shoes with a triangular opening at the heel. At just the right moment, a metallic peg would emerge from the floor of the stage and hook to the shoe’s heel, allowing Michael to perform the move and claim all our vocal chords as fans screamed and marvelled at another wonder of his world.

Using these shoes and the elaborate mechanism within them, MJ would perform the move in music videos, starting with “Smooth Criminal”, and in front of packed arenas.

playMichael Jackson pulled off one of his most iconic moves using an elaborate, specially designed pair of shoes. (Journal of Neurology)

By the time he introduced the move to his repertoire, Michael Jackson was already nearing god status. The 45-degree tilt elevated his craft to the stuff of legend.

Fans were bewildered at seeing this previously unexplainable feat, and like almost everything the King of Pop ever did, they, or rather, we all tried to copy him.

According to their report in the Journal of Neurosurgery: Spine, “Several fans including the authors, have tried to copy this move and failed, often injuring themselves in their endeavours“

“You can bend a maximum of 25 degrees forward before you fall on your face”, Dr. Manjul Tripathi, lead author of the report, tells CNN.

For that fact alone, the authors stressed that, despite using ‘tools’ to achieve the effect, Micheal physical abilities also played a major role.

“Even with specially designed footwear and the support of the hitch member, the move is incredibly hard to pull off,” they wrote, “requiring athletic core strength from strengthened spinal muscles and lower-limb anti-gravity muscles“.

Tricks and special shoes aside, Michael’s influence on dance cannot be ignored. Thanks to him, a generation of young future dancers learned to push themselves, and oppose gravity as best they could.

Science has figured out How King of Pop did the iconic “Smooth Criminal” move. was last modified: May 24th, 2018 by Igbokwe John