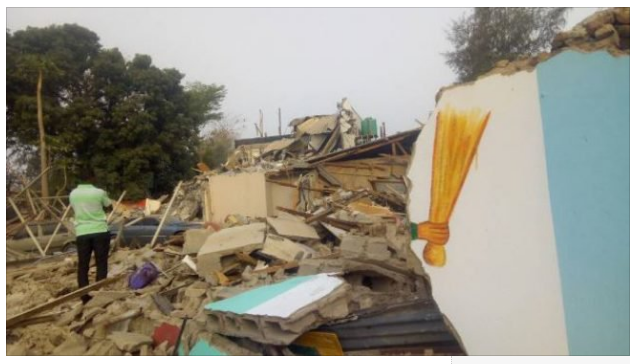 The head office of the All Progressives Congress (APC) faction which suspended Nasir el-Rufai, governor of Kaduna state, has been demolished.

TheCable learnt that the demolition was carried out under the supervision of armed security personnel and some suspected thugs.

The team which pulled down the building located at 11B, Sambo road, GRA Kaduna, was said to have arrived at the place around 4 am on Tuesday.

An aide of Hukunyi simply identified as Abdulraham told journalists that soldiers blocked the two entrances of the building while the exercise was going on.

“The bulldozer was accompanied by armed soldiers who blocked both sides of the road leading to the building,” he said.

Some loyalists of Hunkuyi have accused el-Rufai of masterminding the act but the governor is yet to respond as Samuel Aruwan, his spokesman did not reply a text message sent by TheCable.

However, a senior government official who did not want to be named said the demolition was carried out by the Kaduna state Urban and Property Development Agency (KASUPDA).

He said the property was allocated for residential purposes and not for political activities.

Although the crisis in the Kaduna chapter of the APC has been on since 2015, it reached its height on Thursday when Hukunyi group issued a query to El-Rufai and suspended three of the governor’s aides.

El-Rufai had dismissed the query but the group gave him 48 hours to respond to allegations of anti-party activities levelled against him.

In a swift reaction, the APC faction loyal to el-Rufai suspended Hunkuyi and 28 members of his group.

But that did not stop the anti-el-Rufai group from suspending the governor for six months.

Another faction loyal to the governor overruled the suspension, describing it as laughable.

The crisis is coming at a time President Muhammadu Buhari appointed Bola Tinubu, national leader of the party, to reconcile aggrieved individuals in the APC.