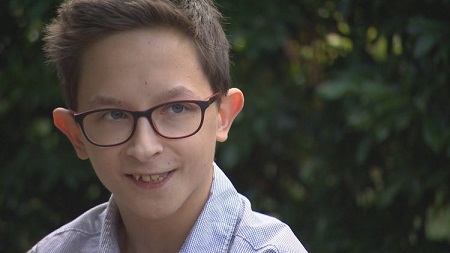 A lot of people look younger than their age, but 23-year-old Tomislav Jurčec, from Zagreb, Croatia, is an extreme case, Oddity Central reports.
Due to a fault in his pituitary gland, which controls growth and ageing, he remains stuck in the body of a 13-year-old kid.
Tomislav admits that looking 10 years younger than his actual age does have disadvantages. like having to produce an ID when buying restricted goods like cigarettes and alcohol, but he always prefers to look at the glass half full. And he has plenty of reasons to do so. For starters, his youthful looks and diminutive stature have helped him land an acting gig on HBO’s hit show Game of Thrones, where he worked as Peter Dinklage’s stand-in and as the uncredited “Hero Corps Child”.
The 23-year-old also says that when other people his age will have to worry about married life and raising children, he will have a 10-year advantage to living his life to the fullest.
Tomislav’s best friend, Zvonimir, says they first met 10 years ago, and even then he looked very young for his age. At first, he didn’t believe he was 13, but he got used to his youthful looks and thin child-like voice over time. For those who don’t know about his condition, however, seeing Tomislav smoking cigarettes or drinking a beer at the bar is a peculiar sight.
“If we drink or something like that, people look at the waiter rather strangely, as if to say: ‘How could you give alcohol to a kid?’” Zvonimir said.
The same goes for buying cigarettes, but Tomislav Jurčec says he still finds the experience comical.
“I find that very funny. I like to call that ‘shock and disbelief’,” he told The Telegraf. “I raise my head, I smile, I give my ID and the next words out of their mouth are: ‘Here are the cigarettes, thank you and goodbye!’”
See the 23-year-old Man Currently Stuck in the Body of a 13-year-old Boy Due to Rare Condition (Photos) was last modified: June 29th, 2017 by Arinze Ago