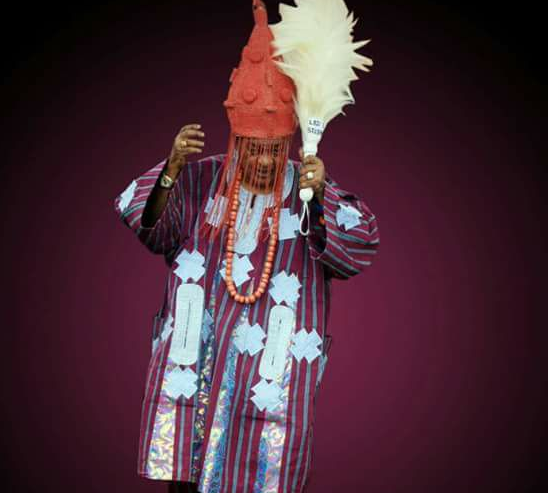 We recently published an article on the most powerful kings in Yoruba land, following the recent row between the Ooni of Ife and the Oba of Lagos, Rilwan Akiolu.

One of the kings mentioned in that article was the Alaafin of Oyo. He is the ruler of Oyo, a position currently held by Oba Lamidi Adeyemi III ranks second among the Obas in Yorubaland.

The Oyo Dynasty dates back to the Old Oyo empire which recognises Alaafin as emperor. There are powerful people within the Oyo kingdom who very few people know about.

They are women who control the kingdom. In an article by Comsicyoruba titled: Ladies of the Oyo palace and another article by Abiyamo, 8 of the most powerful women were described:

The women beside the Alaafin of Oyo. Picture Credit: Abiyamo.com

Iyamode is the only person the Aláàfin kneels before. Whenever the Aláàfin goes on his knees before this influential woman, she returns the salutation by kneeling too.

However, she never reclines on her elbow while kneeling. She is one of the most senior eight priestesses inside the Aláàfin’s royal household.

Among the Yoruba people, the Aláàfin of Oyo is worshipped as the living incarnation of the Sango, the god of thunder.

Inside the palace, the Aláàfin has a private place where he worships Sango. Iya Naso’s is in charge of this spiritual room.

She is responsible for Sango worship in the palace along with its rituals and requirements.

Iya Kere is in charge of the treasures and paraphernalia of the Oyo kingdom, including the crown, which only she is allowed to place on the king’s head.

She keeps the royal insignia and all the paraphernalia used on state occasions and special events.

Iya Kere is also the ‘mother’ of all the Ilaris (male and female eunuchs who are kept in the palace with half their heads shaved off) and she keeps in her custody all the sugudus that bear the marks of each Ilari in order to ensure the safety of the life of the King.

Iya Kere exercises full power over the ‘Olosi’ can even have him arrested and put in chains if he crosses his bounds. Iya Kere is the feudal head of the Aseyin, Oluiwo and the Baale (now Soun) of Ogbomoso. Once she assumes the office, she remains a celibate for life, that is the tradition.

Alaafin Oyo picture from around 1900

Iya Oba is the official mother of the king. After the demise of the Queen Mother, another of the ladies of the palace is then made the Iya Oba and she is the one who is then supposed to play the role of a biological mother to him.

The Iya Oba is the third person in the room when the King and the Bashorun worship the Orun in the month of September every year, a very special privilege.

She is referred to as the King’s Adoshu Sango meaning the King’s devotee to the Sango mysteries.

It is the normal practice for all Sango worshippers to devote one of their children to the worship of Sango and that is the role that Iya-fin-Iku fulfills for the Aláàfin.

She is also in charge of the sacred Sango ram which is allowed to go everywhere and about the markets without anyone molesting it and the ram can also eat with impunity anything.

The Iyalagbon enjoys massive influence and controls a portion of the Kingdom.

She is the Aláàfin’s personal attendant. It is the Are-Orite who sees to it that the royal meals and royal bed is properly made.

She also makes sure that the royal chambers are neatly arranged. When an Aláàfin is enthroned, it is the Are-Orite who places the umbrella-like silken parasol over his head as a canopy and she is constantly by the side of the Aláàfin to see to his needs and small services on public and state events.

See the 8 Most Powerful women in Alaafin of Oyo Palace – He kneels Before one of them was last modified: May 11th, 2017 by Daniji Emmanuel