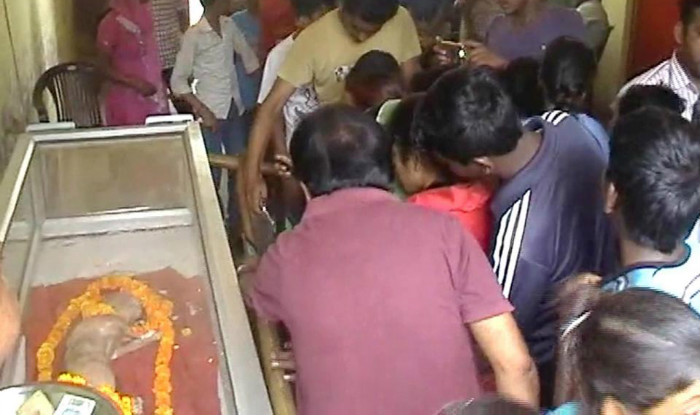 People have been left in shock following the revelation of photos of a cow born with a human face and worshipped as a god in an Indian village.

Photos of a calf born with human features have caused commotion online. Cows which are considered a sacred animal in India. The extraordinary incident took place at Muzaffarnagar in Uttar Pradesh area of India.
Related: See How Villagers Worship This One-eyed Goat in India (Photos)
The baby cow was born with eyes, nose, and ears that resemble a human. The calf was hailed as an incarnation of God, an avatar of Lord Vishnu, Gokaran and worshipped by the villagers but the deformed cow died an hour later after birth.
Raja Bhaiya Mishra, 55, the manager of the cow shelter, was quoted saying, ‘It’s a miracle that the calf was born in this shelter. Thousands of people have been here to see it. We will be cremating him in three days, and a temple will be built for him. This avatar has most definitely created a devotion feeling amongst the people.’ Among the hundreds of visitors to catch a glimpse of the ‘god’, Mahesh Kathuria, 50, a local businessman who came to see the calf, said, ‘God has taken birth from the body of a local cow. We came here to seek his blessings. Religiously, it is an avatar of Vishnu. We believe it’s a similar character mentioned in Bhagavata Puran, a Hindu religious text.’
Read Also: Mutant: Cow with Two Heads Born In Northern Nigeria (Photos)
Despite the villagers claiming the calf to be Lord Vishnu avatar, the animal experts have rubbished off the claims and saying it to be a case of ‘anatomical anomaly’. But this being not an everyday incident, it has certainly caught the interest of the social media.
The pictures of the dead calf with flowers garlanded around the neck and kept in a glass case is doing rounds on the internet.
See Calf Born with Human Face and Worshipped in India (Photo) was last modified: June 6th, 2017 by Arinze Ago