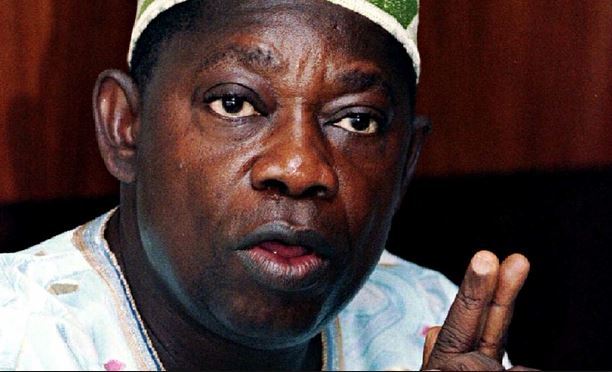 According to Yoruba history, there is no Aare ona kakanfo (Yoruba war Generealisimo) who did not die fighting. This informs the reason that there were only 14 of the titleholders in the last 500 years. The title of the Aare ona kakanfo is the highest warrior title in the Yoruba ethnic of South-West Nigeria in West Africa.

There have been only 14 holders of the title who have died in the history of the Yoruba race. The 14 holders were: Kokoro gangan, Oyatope, Oyabi, Adeta, Oku, Afonja, Toyeje, Edun, Amepo, Kurunmi, Ojo Aburumaku, Latoosa, Ladoke Akintola and MKO Abiola. The serving Aaare Ona Kakanfo is Aare Gani Adams, who was the leader of the Oodua Peoples’ Congress, OPC.

A peep into the spiritual responsibilities attached to the title probably explains why the late Olubadan of Ibadanland, Oba I.B Akinyele prayed in his book, Iwe Itan Ibadan that no Ibadan indigene should ever become the Aare Ona Kakanfo again. Before taking office, Kakanfos of old were made to pass through rigorous spiritual exercises including shaving the hair clean after which 201 incisions are cut on the bald head with 201 different lancets. Specially prepared ingredients from 201 viols are rubbed into the cuts, one for each.

The incisions are mainly to make the Kakanfo fearless and courageous, hence the stubborn and obstinate nature of Aare Ona Kakanfos. In the days of the Oyo Empire, Oyo indigenes or residents were never made Kakanfos because the Aare was not to give way to anyone, not even the Alaafin, if the need ever arose.

An Aare Ona Kakanfo would lead battles, fight wars, mobilise and train “soldiers” and conquer the enemies. The post is sacred, powerful and diabolical. The position is only reserved for powerful sons of the Oduduwa and influencial people.

It is however, worthy of note that despite dying mysteriously, 4 of the Aare Ona Kakanfo did not die in war.

The very first Aare was Kokorogangan of Iwoye-Ketu. He is a friend of Alaafin Ajagbo, the Alaafin that created the post. He was a warrior and a strategist. He won many wars for the Alaafin. He died in a battle with the Ibariba. Aare Oyatope of Iwoye who took over after many decades also died in a battle after he had defeated Basorun Ga in previous battles

Yorubaland will never forget Iyanda Asubiaro Latoosa of the Oke Aare fame in Ibadan, Latoosa, Akintola’s predecessor died in the course of the 16-year Ekitiparapo War that shook the whole of Yorubaland. Ekitis and Ijesas came together with their allies and in a desperate battle to obtain independence from Ibadan, which held them under subjection for decades they spoilt for war. After spending years on the war front on the hills of Imesi Kiriji, Latoosa died of a broken heart in 1885. Of course by the end of the Ekitiparapo War, the face of administration of Yorubaland changed, the Ibadan yoke was thrown off just as the British became the new Masters.

Even Ojo Aburumaku, who had no reason to fight at all, as no one wanted to fight him, had to foment a civil war by himself in Ogbomosho and still died fighting. As for Aare Afonja, at the zenith of his glory, he was the greatest and most powerful Yoruba ruler. However, his invitation of he Fulani to Ilorin caused his downfall. He eventually died at the hand of the Fulani’s. It was during Aare Toyeje of Ogbomoso time that a rival Aare emerged in person of Aare Edun of Gbongan. He eventually died a sad man because he was not accorded the respect he deserved. Aare Edun of Gbogan lost favour and respect after he failed to retrieve Ilorin from the hands of the Fulani’s.

Aare Kurunmi’s case was that of self sacrifice, obduracy in defence of tradition, by the time Kurunmi became Kakanfo, the Oyo Empire was already in decline as a result of the events leading from the rebellion of the 6th Kakanfo, Afonja, and the loss of Ilorin to the Sokoto Caliphate, in addition to internal wranglings and power plays that saw the crowning and demise of about four Alaafin in rapid succession. One of the Alaafin who succeeded Aole was Labisi, who had a powerful Prime Minister, or Basorun, called Gaha, or Gaa,

In 1833, Oluewu became Alaafin but his tenure was short; he died in 1835 and was succeeded by Atiba Atobatele in 1837. Atiba, as a young prince grew up with two warlike friends — Oluyole and Kurunmi. When he became Alaafin, he appointed Kurunmi Aare Ona Kakanfo and Oluyole, the Bashorun. Kurunmi made Ijaye his headquarters since, as Kakanfo, he could not live in the same town with the king, while Oluyole lived in Ibadan, a camp of warriors from all over Yorubaland that was fast growing into a huge metropolis. Atiba ruled from 1837 to 1859, and as his health was failing, he summoned his cabinet, swore them to an oath and instructed them to install his son, Adelu, as successor. Kurunmi was not among the chiefs summoned to take the oath as he was said to have a strained relationship with the Alaafin at the time. Hitherto, the custom had been that whenever an Alaafin died, his crown prince (Aremo), and his closest adviser, Samu ( a member of the Oyo Mesi), must die with him by being buried with him or by committing suicide.

So, the Oyo Mesi did Atiba’s bidding and enthroned Adelu as Alaafin. At Atiba’s burial, Kurunmi expected to see Adelu buried along with his father but that did not happen, a breach of custom and tradition that he could not stomach. As a result, when Adelu was crowned, Kurunmi refused to pay homage to him: the set and props for a major conflict were being emplaced by the dramatis personae. An incident regarding a woman at a town called Ijanna, who died intestate seemed to have brought matters to a boil. In those days, whenever anybody died intestate, the belongings reverted to the crown. Ijanna was however a village of subordinate status to Ijaye, the Kakanfo’s headquarters. Some people sent messages to the Alaafin on the woman’s properties, while others sent to the Kakanfo.

Alaafin Adelu sent people to Ijanna to go and bring the properties. On their way back, Kurunmi ambushed them at Jabata, killed many of them and took 240 of them as war captives. When news of this got to Alaafin Adelu, he sent a message to Kurunmi to release the people. Kurunmi responded by saying the people are now slaves and can only be released if they are purchased.

The Aare picked gunpowder; he wanted war, and so, on the 10th of April 1860, the Ijaiye war began.

The Ibadan war was the heaviest where casualties were many. More than 141 towns defended Ibadan when she waged war against Ijaiye. Ijaye people were betrayed while Alaafin was against the Kurumi. That was how Ibadan won the war against Ijaiye. They feared and respected Aare Kurumi. His five children later died in the war, while the skull of one of them was brought to him, thus he was shocked beyond doubt. He became devastated and dispirited and later committed suicide by plunging into the Ose River. Another Aare Ona Kakanfo’s story that is worthy of note was Chief Samuel Ladoke Akintola, who was shot sporadically by soldiers during the first coup in 1966.

The last Aare Ona Kakanfo before Iba Gani Adams was Chief MKO Abiola who died in military custody on 7th July 1998, the same day he was supposed to be released after 4 years in military detention.