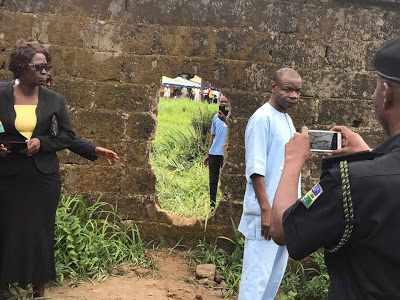 Deadly kidnappers who abducted students and teachers from a school in Lagos are said to have carved a hole in the school’s fence before gaining entrance.

It has been revealed that the criminals who kidnapped six students and teachers of the Igbonla Model School, Igbonla near Epe at around 5:00 a.m. this morning used the Imeru/Iji waterway to access the swampy forest bordering the school before opening a hole on a part of the school fence to gain entrance into the school compound.
The Lagos State Commissioner of Police, Mr Fatai Owoseni in the company of top police officers in the state led a search and rescue team to the school and adjoining waterways as well as forest in search of the gunmen. Mr. Owoseni, who was at the school very early in the morning, appealed for calmness from parents and guardian of the kidnapped school children to enable security agencies to focus on rescue operations.
The CP further added that security agencies were intensifying efforts towards ensuring safety and security of the good people of Lagos, stressing that useful information from members of the public would be invaluable to the team’s efforts. With the CP were the Commander, Rapid Response Squad, ACP Olatunji Disu, officers from SARS and state Anti-Kidnapping Squad. See How Kidnappers Gained Access Into Lagos School Before Abducting Students and Principals (Photos) was last modified: May 25th, 2017 by Arinze Ago