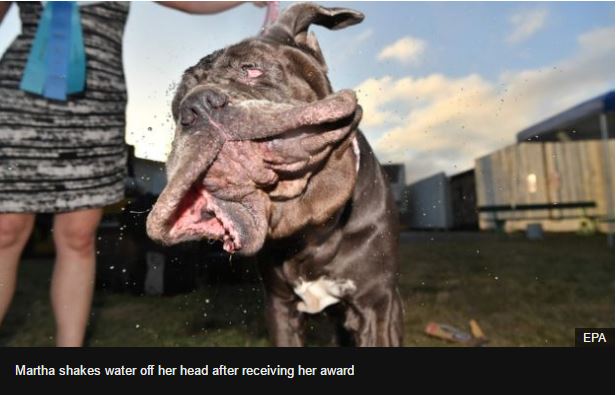 Martha, a Neapolitan mastiff, has been named this year’s World’s Ugliest Dog.
The annual competition, now it its 29th year, was held in Petaluma, California. Martha, with owner Shirley Zindler, beat 13 other contenders to be presented with a trophy and a $1,500 (£1,200) prize.
The big-jowled crowd-pleaser will now be flown to New York for “media appearances”, according to the organisers.
The Sonoma-Marin Fair, where the event takes place, says the event typically includes lots of dogs that have been rescued from shelters and puppy mills.
Martha is former rescue dog who went nearly blind from neglect, said Ms Zindler. After various operations, she can now see again and is pain-free. The Associated Press news agency said Martha immediately won over the judges by obliviously sprawling across the stage, with no intention of doing any tricks.
The panel based their decisions on first impressions, unusual attributes, personality and audience reaction, the agency added.
“The contest has done much to raise awareness for adoption of dogs, and that no matter their physical detractions, these animals are loving companions,” says the fair’s website.
“And the dogs certainly seem to enjoy the adoration of the fans.” See Photos of the World’s Ugliest Dog as It Bags Award in America was last modified: June 26th, 2017 by Arinze Ago

Meet the Baby Boy Who Was Born...