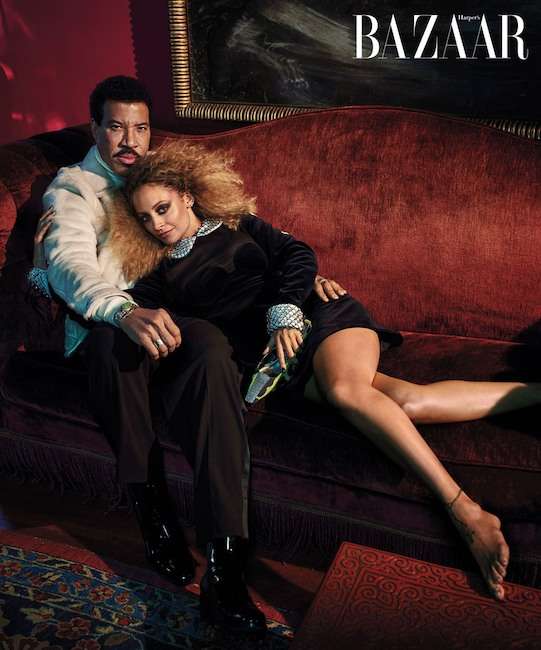 Kanye West, Mariah Carey and more artists pose with their kids for the fifth annual ICONS edition of Harper’s Bazaar.

The theme of the publication’s fifth annual ICONS edition is musical royalty and their kids.

Kanye, North and Saint are joined in the issue by Mariah Carey and her twins, Christina Aguilera and her two kids, Lionel Richie and Nicole Richie, Keith Richard’s daughters Theodora Richards and Alexandra Richards, as well as Bruce Springsteen and daughter Jessica Springsteen, who appear on the cover of the U.S. newsstand edition.

Kanye, North and Saint appear on the subscriber cover.

“I am especially excited about this year’s theme for ICONS because it involves family. I’m a very family-oriented person so I wanted to meet the families of some of my biggest music idols, it was amazing to see that some of the industry’s most ground breaking rockstars have a sense of tenderness with their loved ones, even if they are adults!” said creative director Carine Roitfeld.

“Keep your focus on what you really care about.” Bruce’s best advice he’s given his daughter.

“Family is everything to me. Whenever I have time off, the first thing I do is go home to see everyone. It’s what makes me the happiest.” Jessica says on family.

“I wish for my kids to discover who they are and explore their passions to the fullest.” Lionel says on his wishes for his children.

“My dad and I will do anything for a laugh. If that means we’re the butt of the joke, so be it. In a nutshell, we’re desperate show ponies.” Nicole says on her similarity to her dad.

“I hope my children never lose their confidence to society.” Kanye says on his hopes for his children.

“Family is the most important thing to me. My children have provided me with such joy as they’ve developed their own unique personalities. Moroccan has a knack for technology, and Monroe is really musical. They’re each other’s best friends, and I love watching them grow up.” Mariah says on her twins.

“I love being mama bear and providing support, strength, and a safe haven to my babies and loved ones, knowing that, above all else, it’s the most important job I have.” Christina says on motherhood.

“We are a traveling band of gypsies, this bunch. With everyone’s crazy lives, it makes for great stories around the fireplace. Music, dancing, and laughter fill our home, and we make it so we’re never apart for too long.” Theodora says on the Richards family.

“Family to me is not just blood. It’s a unity of powerful love and compassion for one another; it’s about respecting and trusting one another.” Alexandra says on family.

It’s exciting to see musical royalties bond with their kids right on camera, even ICONS get tender with their kids even though some of them are adults! This truly means family is everything.

Harper’s Bazaar’s September issue hits newsstands on Aug. 21. Harper’s Bazaar editors from around the world will come together to celebrate the fifth annual ICONS event at the Plaza Hotel on Sept. 7.

See Who is in the Fifth Annual ICONS Edition of Harper’s Bazaar was last modified: August 3rd, 2018 by Igbokwe John