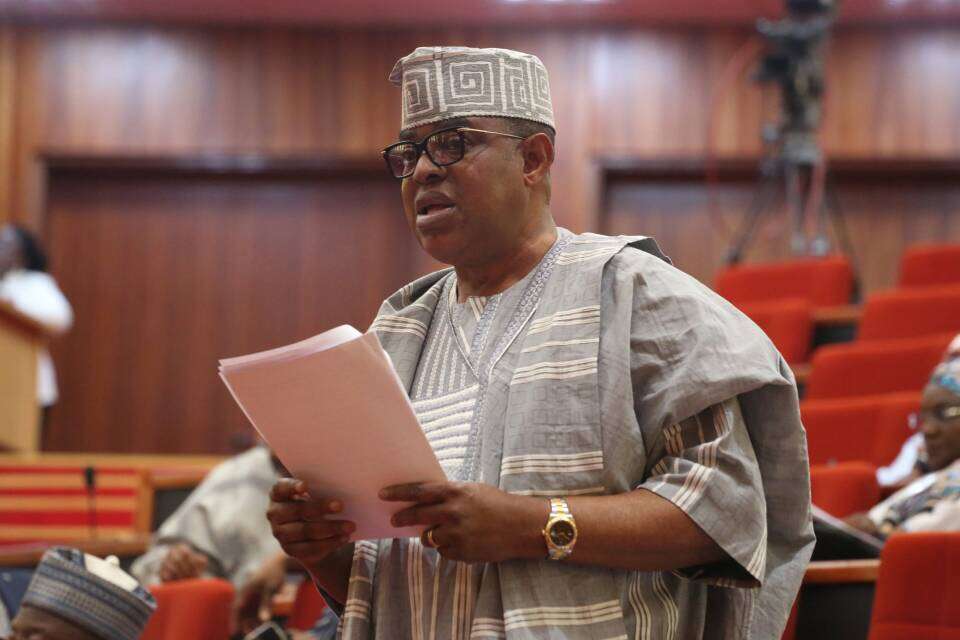 Senator Bareehu Olugbenga Ashafa who represents the Lagos East Senatorial District at the National Assembly is running again for the Senate. His banners are already all over his senatorial zone.

Before this, he had played a leadership role as the Executive Secretary and Permanent Secretary in 9 moribund Government Schemes. He pioneered the Electronic Document Management System (EDMS) in the Land Registry and initiated the electronic Certificate of Occupancy (e-C of O) recently launched by the Lagos State Government. He raised the revenue base of the Lands Ministry from 1 Billion Naira in the year 2001 to 13.23 Billion Naira in the Year 2010 before he was elected a Senator of the Federal Republic of Nigeria representing Lagos East Senatorial District in April 2011. He had his Primary and Secondary School Education at Christ Church Cathedral Primary School, Marina, Lagos (1961-1968) and the CMS Grammar School, Lagos, (1973 set) respectively. He trained in Morgan State University, Maryland USA (graduated 1978 Set) and later at University of Tennessee, Knoxville, USA where he bagged his Masters in Public H. Administration in 1979.

When he was first elected into the Senate in 2011, no one was left in doubt that here comes a man whom the cap fits. Clearly, on the strength of his experience, spanning both the Public and Private sector over a period of 30 years; it was a good bet that in him, the electorate of Lagos East Senatorial District has voted a good representative.

During the campaigns in the build-up to the 2011 election, Ashafa hinged his electoral promises on 4 cardinal programmes with the acronym – EYES: • Effective Representation •Youth Empowerment• Educational Enhancement •Sustainable Agricultural Development. EYES  as a responsive project-package is all-embracing in content, service oriented in its outreach and society-friendly in the delivery of its articulated social responsibilities. Ever ready to serve, Ashafa hit the ground running after his inauguration on the floor of the National Assembly as Senator of the Federal Republic of Nigeria. It did not, therefore, come as a surprise that his record of achievements are there for all to see across the length and breadth of Lagos East Senatorial District; a testimonial to the tireless drive of Senator Ashafa in bringing his Senatorial District abreast development and changing times in fulfillment of electoral promises made to the electorate in 2011. He also campaigned and won again 2015 and today he has delivered on his promises.

So in the last 4 years and some months, Senator ‘Gbenga Ashafa has sponsored and co-sponsored Bills and motions.

Senator Ashafa’s concept of empowerment is wider in scope. In its package and implementation, it provides each beneficiary with an inbuilt capacity to self-create and self- generate wealth through acquisition and application of practical skills and knowledge or as the Distinguished Senator puts it: “At the heart of my Empowerment Scheme is the urgent need to diversify, strengthen and deepen the industry with the largest employment-generating-opportunity in our economy, the informal sector.”

The robust empowerment drive initiated by Senator Ashafa in concert with empowerment experts has given birth to a good number of programmes that guarantee self-sustaining and self-revolving entrepreneurship culture amongst many youths in Lagos East Senatorial District. The certificate awarding ICT programme has helped a great deal in helping beneficiaries to secure employment.

Ashafa Educational Enhancement Programme is a developmental initiative designed to find answers to salient questions often confronted by both the indigent as well as well-to-do students in their educational pursuits in public schools. Apart from fortifying laboratories of secondary schools in some schools within Lagos East Senatorial District, the Educational Enhancement Programme has also awarded different categories of scholarships and various financial assistance to indigent students to give their parents succour as well as help in giving the beneficiaries some degree of leverage in their desire to acquire education.

Besides the key focus of senator’s electoral promises, he has also used his good office to orchestrate and/or facilitate improvements in, infrastructural development, healthcare, environment, housing and urban development.

Shortly after being sworn into office, senator Ashafa began a Free Monthly Health Care Programme which centered on free screening for Diabetes and Hypertension, free Eye Screening and provision of Eye Glasses, free drugs for various illnesses, provision of corrective surgery for some eye cases, provision of other surgeries that were referred to the hospital from our free screening exercise.

On a regular basis, toiletries and medical disposables are being presented to pregnant women.

INITIATIVES TO FELICITATE WITH CONSTITUENTS DURING FESTIVE PERIODS

In each of the festive periods, the constituents throughout the senatorial district are further given a sense of belonging to our various activities such as visitations to the motherless-baby homes, soup kitchen etc. The periods also serve as a feedback time, where constituents’ needs are made known to the Senator.

CONSTITUENCY PROJECTS AT A GLANCE

It is also important to add some of the constituency projects around the Lagos East Senatorial District, facilitated thus far, by Distinguished Senator Ashafa.