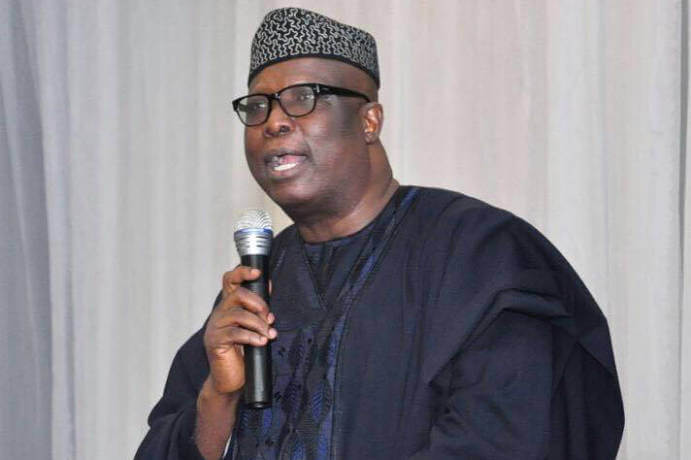 The declaration of former Senator, Babafemi Ojudu could be likened to a big carnival, as part of Ado Ekiti was shut down for hours when he made his formal declaration for the Oke Ayoba Government House come July 14, 2018. The APC has announced May 5 and 6, for its governorship primaries in the state.
The declaration was held at an open field in Okeyimi, opposite First Bank, Ado Ekiti. Senator Babafemi Ojudu, Special Adviser to Pres. Buhari on Political Matters is one of the leading aspirants in the governorship contest under the platform of APC. He is a native of Ado Ekiti. Ojudu, who looked calm in his orange with blue patterned Ankara Aso-Ebi joined thousands of his supporters as they walked from Okeyinmi to the APC party Secretariat at Ajilosun along Ikere/Ado road. He was welcomed to the party Secretariat by the party deputy Chairman, Chief Mrs. Kemi Olaleye and other party Excos. His manifesto, titled: “My Agenda for Life More Meaningful for Ekiti People”, said he envisions ‘a prosperous state where more value would be added to the lives of the people. The manifesto will cover a wide range of economic and social development issues addressed to overcoming the manifestations of poor governance and challenges in Ekiti State over the years. According to Ojudu, “these challenges are traceable to a myriad of causative and consequential factors bordering on lack of capacity for public governance; endemic poverty; neglect; and the culture of entitlement.” The Special Adviser to President Muhammadu Buhari on Political Matters, Senator Babafemi Ojudu has likened his governorship aspiration in Ekiti State to continuation of his community service and commitment to humanity.

ADO DELEGATES ENDORSE SBO
Part of the activities towards the early declaration of Senator Babafemi Ojudu who represented Ekiti Central Senatorial District from 2011 to 2015, took another turn on Thursday 8th March as Ado delegates lend endorsement. His adoption by party Excos in Ado Local Government as their choice candidate makes his chances of clinching the ticket of the All Progressives Congress in the coming Ekiti State primary and gubernatorial election stronger. Chief Bisi Egbeyemi, a party leader in the state and members of the Exco from the eleven wards in Ado Ekti, pass a vote of confidence on the journalist turned politician and promised to work together for his victory in clinching the party ticket in the primaries expected to hold between April and May this year. The endorsement of the presidential aide on political matters, Ojudu, put to rest the jostling for the soul of Ado where the bulk of the votes in Ekiti State domiciled by gubernatorial hopefuls who have all centred their scheming around cornering the capital city to achieve electoral victory. The endorsement meeting was held at the Ado Local Government secretariat of the APC have in attendance top party executives including the Ado Local Government APC Chairman, Pa. Adigun, Ademola Adetola, Otunba Olanipekun, (a.k.a Tugeere), among others.

HOW HE BRANDED THE STATE CAPITAL
Ahead of his declaration on Friday early hours of Thursday morning, his mini billboard flooded every nook and cranny of the state capital, Ado-Ekiti with different description like “Ero Witi-Witi” “New Erelu, New Fresh Ideas”, “Brilliant, Bold”, “Ekiti Deserve The Best” among others were written on the mini billboard.
The over 100 mini billboards that cost millions of naira were displayed from Ajilosun to Okeyinmi, to Fajuyi road, to Adebayo road among other strategic roads in the state capital. Aside that, Fuji music star, Saheed Osupa entertained the enthusiastic crowd alongside pop singer, Small Doctor. The presence of Osupa and Small Doctor added more glamour to the declaration.

HIS DECLARATION SPEECH
The rebirth of the state can no longer wait, nor can it be sacrificed on the altar of ego, self-centeredness and inadequate preparation for the task ahead. our blueprint explains the level of our preparedness to spearhead the rebirth of Ekiti. The time has come to rescue Ekiti State from its steady descent down the development ladder caused by the Oshoko Epidemic.”Here we are today with a firm determination to challenge the deceivers and oppressors of our people, and relieve Ekiti people, especially the downtrodden of their burden.” He said he possesses the willpower and commitment to lay a new foundation that will re-model the state and make its teeming intelligentsia proud again. He assured the people that he will not destroy their homes and markets and promised to make education the pride of Ekiti State once again. The state, he said, under his watch and other progressives, will catch up with and surpass its glorious past. The power to make a difference lies within us as critical stakeholders. Together, we can make the change we desire. He promised to make his fine agenda- Foster Economic Growth, Invest in the People, Nurture Enterprise, and Innovation and Ensure Wellbeing the cardinal point of his administration. He said “I am here to liberate my people. I am here to take Ekiti to the Promised Land. I am learned. I will not watch and see my people perpetually being humiliated by those who have no plan for us. I am here to set our people free and then restore our economy. “Today, I declare my intention to run as the governor of this state. Today, I enjoin all of you to come with me and let us rescue our state from the claws of our oppressors.” Aside that he also wrote a letter to every citizen of Ekiti State which he said the letter is a bond between him and the people of Ekiti State if given the opportunity come 2018.

Still had regular sexual activities, even when i had stroke – Ernest Asuzu