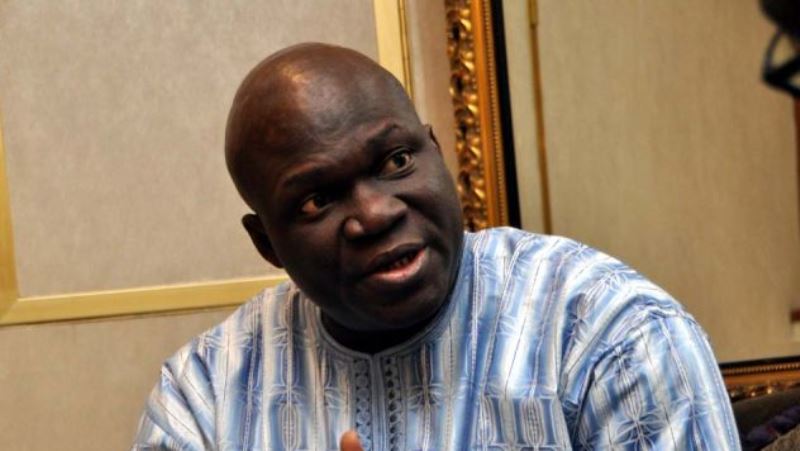 •Talks About His Late Boss

Last week, City People went after Reuben Abati a few days ago to get him to tell us about his late boss, Buruji Kashamu.

For those who don’t know much about Dr Reuben Abati lets tell you a little about this 1st class brain who is a respected intellectual and media personality.

He is a scholar, journalist, columnist and literary expert. Dr Reuben Abati was born on the 7th of November, 1965 in Abeokuta, the Ogun State capital.  He had both his primary and secondary education in Abeokuta and graduated from the University of Calabar, Nigeria in 1985, with a First Class Honours and as Class Valedictorian. He was a recipient of the Vice Chancellor’s Prize for the Student with the Best Overall Academic Performance in the Graduating Class. He was also a National Merit Scholar. He later studied at the University of Ibadan as a University Scholar. He holds a PhD in Theatre Arts, specializing in Dramatic Literature, Theory and Criticism from the University of Ibadan (1990), a Bachelor’s degree in Law from Lagos State University, Lagos (1999), a professional training certificate in journalism from the College of Journalism, University of Maryland, College Park, United States (1996-97) and a Certificate in Management and Leadership from the Said Business School, University of Oxford (2015).

Abati originally started his career as a university teacher, teaching courses in Dramaturgy, Theory and Criticism, Special Author Studies, and the Sociology of Literature at the Ogun State University (now Olabisi Onabanjo University), Ago-Iwoye, Ogun State, South-West Nigeria, before embarking on other fields of interest. He is a member of the Nigerian Institute of Management, the Nigeria Union of Journalists, and the Nigerian Guild of Editors. He is also a Hubert H. Humphrey Fellow, a Fellow of the 21st Century Trust, a Fellow of The Nigeria Leadership Initiative and a member of the Aspen Global Leadership Network. He is an Honorary Fellow of the Nigerian Academy of Letters.

Abati worked at The Guardian Newspapers, Nigeria for more than 20 years. He was at various times Member, Editorial Board, Deputy Chairman, Editorial Board/Editorial Page Editor, and later, Chairman, Editorial Board and Editorial Page Editor of The Guardian Newspapers, a position he held for more than ten years. In the course of his journalism career, he has earned a distinction as one of the most influential columnists and editors in the country. He has been active in various genres, including print and electronic journalism and social media.

He was a member and co-presenter of the television discussion programme, Patito’s Gang (2000-2011). He served as a member of the Governing Council of Olabisi Onabanjo University, Ago-Iwoye, Ogun State (2003 -2007) and as a member of the pioneer Board of the Lagos State Security Trust Fund (2007-2011).

He is well-regarded as a leading public affairs commentator, writer and journalist with a unique multi-disciplinary background in drama, management, journalism and law, and experience garnered over the past thirty-two years, in both the private and public sector. Abati has been writing for the Nigerian press since 1985, serving as Contributing Editor, Editor, and Columnist to many publications, covering both the mainstream media and the softer genre of romance and lifestyle magazines. He is very well known for his book reviews, essays and commentaries on national, regional and international affairs. His writings have also appeared in both local and international periodicals and academic journals.

He is a recipient of many prizes for journalistic excellence. These include the Hadj Alade Odunewu/Diamond Award for Media Excellence Prize for Informed Commentary (which he has won four times), the Cecil King Memorial Prize for Print Journalist of the Year (1998), the Fletcher Challenge Commonwealth Prize for Opinion Writing (2000), the Freedom Peace Prize for Journalism (2010) and The Red Media Africa Living Legends Industry Award (2015).

He served as Special Adviser, Media and Publicity/Official Spokesperson to President Goodluck Jonathan (2011-2015). In this capacity, he was responsible for managing the President’s media office, media relations and leading the Presidency’s public communications team. After his stint in government, Abati returned to journalism, writing his regular two columns in The Guardian (Friday and Sunday). He subsequently moved to ThisDay newspaper where he now writes a Tuesday Column titled “TuesdayWithReubenAbati”. In the last 2 years, he has also been engaged as an Anchor/Correspondent with Arise News, where he co-presents “The Morning Show,” and anchors “ThisDayLive” on Sundays. Dr Abati runs a website: reubenabati.com.ng, and posts regularly on Instagram and twitter as@abati1990.

He sees his selection as the running mate to Senator Buruji Kashamu for the 2019 Gubernatorial election in Ogun State as a great opportunity to serve his people.

How did you receive the news of the passing of your boss, late Senator Buruji Kashamu?

I had known before his departure, that he was indisposed. He travelled to Abuja and he came back and he took ill. As at March, April, May, June, and July, he was well. There was nothing wrong with him. But he went to Abuja and he returned and then he took ill.

And of course, you know how it is. He was our political leader. Personally, he was my political mentor and the information went round that he had taken ill and within our political group the information was “let’s keep praying for our leader.” And then we followed the trajectory of his indisposition. At some point, he got well, he could take calls, he could respond to people.

He could respond to Whatsapp Messages but all of a sudden things took a wrong course and I guess he had cumovititis, meaning he had an underlining illness. That further complicated the process. All of a sudden, we heard that he was on oxygen. Then later he was on a ventilator. And suddenly, news just came that he has died. So, all of us within his political family, we are bereaved because he was a very strong leader. He was a man who was very strong on his convictions. He was a very bold and courageous man, clear-headed, absolutely intelligent beyond paper qualifications. In my relationship with Senator Buruji Kashamu, I found a man who was gifted with a lot of wisdom, street-wisdom, a lot of activity, a lot of gifts. In his own areas of competence, Senator Buruji Kashamu was an absolute genius. And he took himself seriously. He didn’t joke with himself. But now that he has died in relation to Covid-19 complications it is curious because he was a man who took his health seriously.

When we were campaigning, I recall that he had a standby doctor who was beside him regularly. After every meal, he will take Vitamins. When he noticed that I was about the only person around him that was not taking any tablet, he wondered aloud, you mean you don’t take any tablet?

I told him No. He said, at your age? You must be looking after your health. Do you know that there and then he sent for his personal doctor. He said look, I want you to check this man. Check his BP, take his Sugar test. That was the first time I will take a Sugar test (diabetes test). The man brought out a needle, he picked my finger, and he said, check him, check him very well. He doesn’t use a tablet. For a man like that he was quite knowledgeable. He may not have had a PhD, but he was enlightened, not just about politics but about personal well being. Ironically, this same man goes to Abuja and returns with a Covid-19 infection. If anybody took his health seriously, he did, including exercises, ergometic exercises. Throughout the campaign we went round, we worked hard. He will be the first to come back and say call me my doctor. Let him check my BP.

Let him check my Sugar Level. And he will do exercises and all of that. What all of these teaches us is that everything is in the hands of God. I do no like the fact that some people have been gloating, over his death. We are all in the hands of God. God determines what happens to every human being. There is no human being who is completely bad. There is no human being who is completely good. Even creation itself is not perfect. As human beings, we are all images of the imperfection of creation. And that is the major we should all learn.