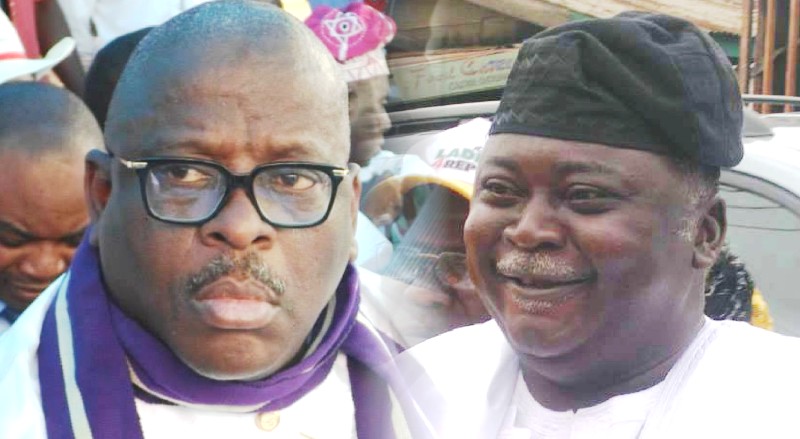 In his lifetime, Senator Buruji Kashamu, the late strongman of Ogun politics, fought so many battles against many strong men in Politics & Business. And he won many. For instance, he was in a big battle against a former head of state, Chief Olusegun Obasanjo, a fight, which OBJ still continued even after Kashamu’s death a few days ago. He was also in one big battle against Chief Kesington Adebutu, the owner of Premier Lotto Limited, popularly known as Baba Ijebu Gaming Limited. Buruji filed so many cases in court and even dragged them before statutory bodies.

His last battle was with 23 rival lottery firms over alleged infringement on his licence from Ghana Games.

City People gathered that the Ghana Games is responsible for about 60/70 per cent of the Gross revenue generated from Lottery games in Nigeria.

The allegation is that the Ghana National Lottery Authority (NLA) granted Western Lotto Nigeria Limited the “exclusive right” in an agreement recently executed by both parties.

Buruji owns Western Lotto, and Western Lotto’s right also allegedly includes “the exclusive right to use the draw numbers of the Ghana National Lottery Authority (NLA) to sell and distribute lotto products and games to customers located in the Federal Republic of Nigeria”.

The first and second defendants in the suit marked FHC/L/CS/2321/19, are the National Lottery Regulatory Commission and Registrar of Trademarks.

An order was given earlier and the order also affects “each and every Point of Sale Station and agency operated by them offering lottery products.”

The case is before Justice C.J Aneke of the Federal High Court in Lagos. Justice Aneke also appointed the 3rd to 25th defendants to represent “the class of persons passing off their lotto products by using trade names and trademarks that are associated with the ‘Ghana Games’…and or who allegedly sell ‘Ghana Games’ lotto products in Nigeria by using the draw of the numbers of the Ghana NLA to sell and distribute lotto games to customers in Nigeria.”

Last December, following an application by Western Lotto’s legal team, Justice Aneke made an Anton Piller order, authorising Western Lotto to enter into and search the offices of the defendants for evidence of the alleged infringement on its licence from “Ghana Games”.

Justice C. J. Aneke of the Federal High Court in Lagos then suspended hearing in the suit filed by Western Lotto Limited, to challenge alleged infringement on his trademark by 23 rival lottery firms.

Joined as the first and second defendants in the suit are the National Lottery Regulation Commission; and the Registrar of Trademarks, respectively.

Western Lotto Limited and the NLRC executed a Terms of Settlement dated July 10, 2020, in which they were urging the court to adopt as the final decision in the case.

But the rival lottery firms had kicked against the adoption of the Terms of settlement by the court.

Why the case was controversial was because Chief Adebutu and late Kashamu are no strangers to each other. They are both rich Ijebu men. Chief Adebutu is from Iperu and Buruji from Ijebu-Igbo. They had clashed politically in Ogun State especially during the run-up to the 2019 governorship election. Kashamu insisted he was the PDP candidate and got court orders to prevent Adebutu’s son, Ladi, from the race, despite the older Adebutu’s efforts to get his son on the ballot.

Late Buruji’s company, Western Lotto, claims to have exclusive rights over Ghana Games, which Premier Lotto and 22 other gaming companies have been allegedly selling to bettors in Nigeria.

Many Nigerians didn’t know that there is Big Money in Lottery Business in Nigeria until late Buruji moved into that business about 5 years ago. The multiple allegations of Tax fraud and economic sabotage he levelled against others showed this. What makes the battle a big one is the personality of those involved. One of them, Chief Adebutu is a respected businessman who has been widely praised for his pioneering role in Lottery & Gambling business in Nigeria and bringing it into the mainstream. He registered Premier Lotto, the Betting Franchise in 2001, Chief Adebutu’s reputation as the driving force of Nigerian Gambling Trade spanned decades before its Commercialisation.

The success of Chief Adebutu’s betting business made former President Olusegun Obasanjo show interest in the sector, and he established a federal agency to regulate lotteries across Nigeria in 2005. Several private entities have since sprung up, taking bets from multiple sporting activities, especially Football.

Many were shocked when late Kashamu, petitioned the EFCC about what he called  Corruption in the betting industry, but deemphasised allegations of being a disgruntled player in the business, saying he had taken the matter to court and was now only concerned about the interest of Nigerians.

The EFCC has been carrying out a complex corruption investigation, which ranges from Tax fraud to Economic sabotage against the lottery firms.

It was Western Lotto that tipped the anti-graft agency in December 2019 about the alleged fraud. He told the EFCC to investigate the lottery companies because billions of naira worth of lost government revenue are allegedly traceable to the betting company.

The companies have been allegedly accused of “short-changing Nigerians”.

But the companies accused Western Lotto owner, of instigating the investigation in a bid to undermine his Competitors just to gain dominance of a section of Nigeria’s betting industry.

Before his death, Buruji Kashamu refuted this speculation. He said he notified the EFCC of an industry-wide corruption that was engulfing Betting in Nigeria. He said: “all the taxpayers’ billions should have been paid into the Lottery Commission Trust Fund to build infrastructure and alleviate poverty among the masses.”