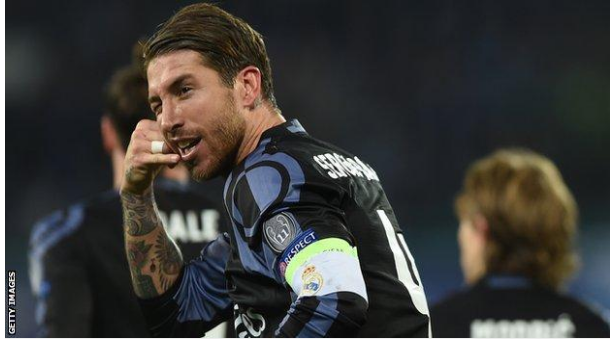 Real Madrid captain, Sergio Ramos left his defensive role for goal scoring as his brace helped the Galacticos come from a goal down against Napoli in the second leg of their Champions League last-16 tie to progress to the quarter-finals.

Napoli were in total control in a one-sided first half and took the lead on 24 minutes when Marek Hamsik put Dries Mertens through on goal as Real’s defence went missing.

However, Ramos stole the show for the night as he netted one and had another header deflected in by Mertens after the break to put the defending champions in control.

Alvaro Morata then followed up Cristiano Ronaldo’s shot to complete a comfortable victory.

Real’s defensive weakness was perfectly exploited by Napoli’s game plan in the first-half – a high-press put Pepe and Marcelo under pressure before Hamsik threaded a perfect through ball to Mertens who finished well in the bottom corner.

But the Italian side ultimately failed to take their other chances – Hamsik fizzed multiple shots wide before Mertens hit the woodwork and Real eventually made them pay.

The 30-year-old may be a defender by trade and have a reputation for his red card collection, but he has also made a name for himself at the other end of the pitch.

Ramos is one of only three defenders to have scored in two different European Cup finals.

And he came to his side’s rescue once again in Naples with two emphatic headers, one deflected by Mertens, at a crucial period in the second half.

With Real Madrid completely outplayed in the first 40 minutes and a goal down courtesy of Mertens’ crisp strike, Ramos rose highest from two Toni Kroos corners straight after the break to silence a 57,000-strong crowd inside the San Paolo stadium.