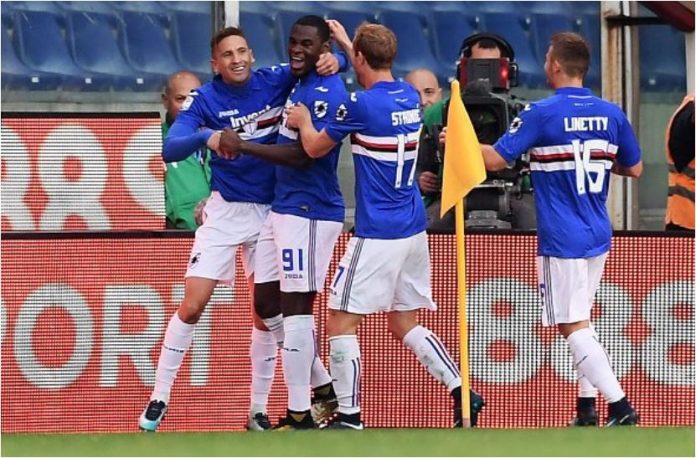 Gianluigi Buffon was left on the Juventus bench in their defeat by Sampdoria, along with defender Andrea Barzagli, because “they need time to get over” Italy’s World Cup exit.

Massimiliano Allegri rested the pair, who retired from Italy duty following the play-off defeat by Sweden.

Juve’s first came from a penalty after Ivan Strinic fouled Douglas Costa – and then Dybala smashed home with seconds left.

Juventus remain four points behind unbeaten leaders Napoli, while Inter Milan overtook them into second spot with their 2-0 win over Atalanta later on Sunday.

The Turin side, who have won the last six Serie A titles, had the better chances early on with Higuain having a shot deflected wide and Mario Mandzukic and Juan Cuadrado both forcing saves following Higuain passes.

But Sampdoria, who are sixth in the table, deserved their victory, scoring three times in the second half.

Zapata’s opener came after a Federico Bernardeschi mistake, with Torreira firing home their second from 18 yards and Ferrari tapping into an empty net.

Goalkeeper Buffon, 39 – who is 21 appearances off breaking the Serie A appearance record – is retiring at the end of the season, unless Juve win the Champions League.

Serie A: Juventus Drop to 3rd Place After Losing To Sampdoria 3-2 was last modified: November 20th, 2017 by Damilare Salami