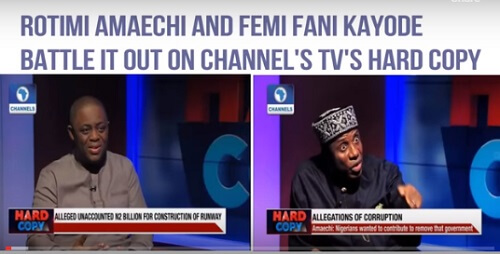 Former Minister of Aviation and PDP chieftain, Femi Fani-Kayode and the Minister of Transportation, Rotimi Amaechi, slugged it out on a live television programme over an N2billion allegation.

While speaking at a Channels TV programme, ‘Hard Copy’ which was anchored by Maupe Ogun, the Minister of Transportation, Hon.Rotimi Amaechi, accused the former Minister of Aviation, Femi Fani-Kayode of embezzling N2billion earmarked for the reconstruction of Port Harcourt International Airport. “We are not on the same level, he is not a character for me to talk about”, Amaechi said, adding that there is evidence and that he is ready to provide it. Meanwhile, the outspoken politician, Femi Fani-Kayode, on the other hand, denied the allegation, adding that Julius Berger was given N1.5 billion out of the money and that he didn’t touch a percent of the money.

Watch the video clip below:

Serious! Rotimi Amaechi and Fani-Kayode Fight Over N2bn Allegation on Live Television [Video] was last modified: May 2nd, 2017 by Arinze Ago