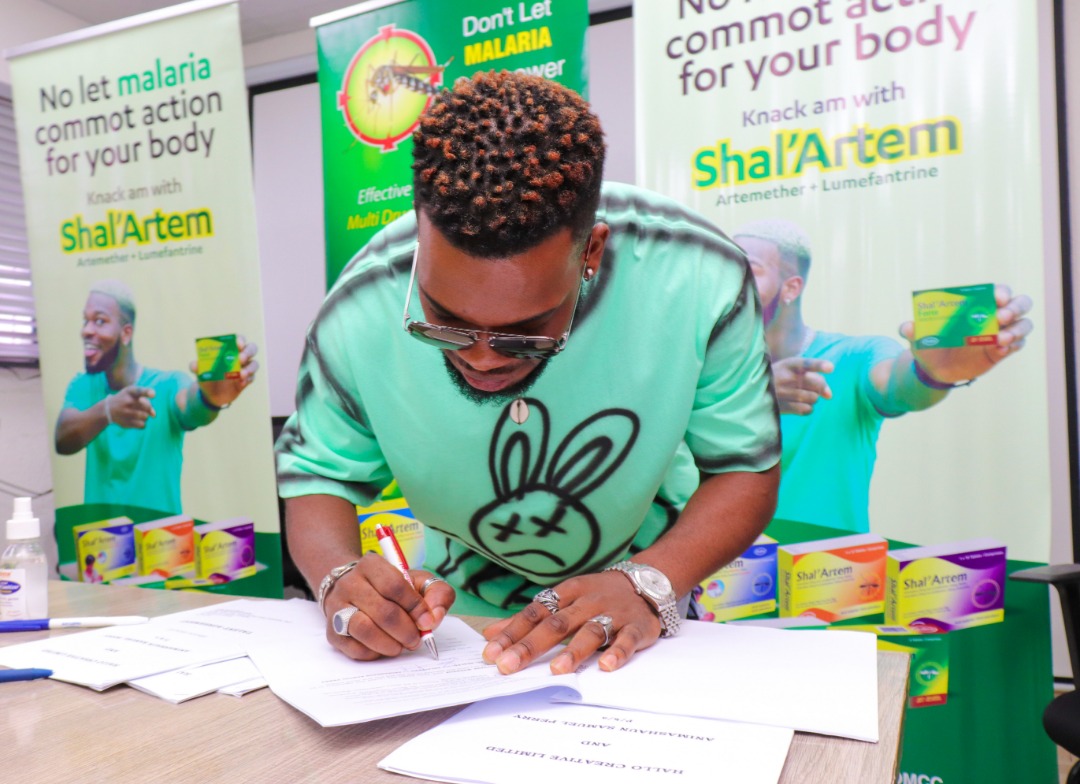 Shal’Artem, the anti-malaria brand of Shalina Healthcare has re-newed the contract of Samuel Animashaun Perry, popularly known as Broda Shaggi, a Nigerian comedian, actor, songwriter, and musician as a brand ambassador for the second year.

At the event that took place at the Lagos, Nigeria Office of the company, the pharmaceutical company through its Chief Executive Officer, Shalina Clifford, said the choice of Broda Shaggy as an Ambassador for the brand is to replicate the mission of the company to get quality medicines to large number of people at affordable prices. She said, “The mission of the company is very simple, making quality medicine available in Africa at affordable prices. We are committed to making quality medicine that everyday people can afford every day. Meanwhile, a lot of common people makes celebrities like Broda Shaggy their role models, so the idea is to get to the Nigerian masses through one of their best representatives.”

Speaking further, Shalina, who attended the event virtually from Dubai, UAE, said; “malaria is one of the deadly killer diseases that need to be kicked out of the society, and with Shal’Artem, the company has provided a formidable drug to do the needful.” Speaking in the same vein, the company’s Vice President, Pharma Business, West Africa, Arun Raj said with the arrays of products the company is manufacturing, it is uttermost drive to make the country healthier. According to him, “Shalina Healthcare is purely African company. We have continued to invest in the continent for close to 20 years. Our presence is in 18 African countries and nowhere else, except Africa. We are building our factory in Nigeria; this will make us to be producing quality medicines in Nigeria for Nigerians at affordable prices.”

Also speaking on the choice of Broda Shaggy, Arun said Shaggy “is a voice of the common people with a great followership” therefore making him the face of the brand clearly indicates that the company is a brand for the people. “We are making medicines which are not just available but also affordable for the average Nigerian” he said.

Also, in his remarks at the event, the Head, Consumer Business, West Africa, Suresh Karuppiahsamy said; “Shal’Artem is a product for common man to address the issue of malaria in Nigeria. We don’t compromise on the quality of our products; we are very committed to Nigeria and we have a long term plan for the country.”

The company’s Superintendent Pharmacists, Theophilus Emeka Adimoha, who also spoke at the event gave account of how the company has made progressive growth over the years. Pharm. Adimoha further stated that Shalina is very compliant with concerned regulatory agencies of the Country – The Pharmacists Council of Nigeria (PCN), National Agency for Food and Drug Administration and Control (NAFDAC)and others. According to him, ‘’we have gone beyond importing to manufacturing’’.

Meanwhile, the Company’s Brand Manager, Analgesic and Anti- Malaria, Mr. Chiuba Nwaosu said the company has kicked off a campaign with Shal’Artem to knock out malaria within three days. Speaking at the event, Mr. Chiuba said; “Malaria can be called a pandemic, according to records about 409,000 people died of malaria globally in 2019 and about 23% of them were from Nigeria. Hence, for us in Shalina Healthcare, Shal’Artem is not just a brand of anti-malaria, rather it represents the expression which gives the power to knock out malaria in three days.

We are initiating a massive campaign which includes a social media campaign and Dance Challenge where health tips and consumer generated content will be used to raise awareness towards the achievement of the Zero Malaria target. Broda Shaggy is joining in this campaign as the face of the brand and an avenue to reach out to millions of Nigerians.” Notably, in this regard, Mr. Chiuba announced the Shal’Artem Brand partnership with a leading entertainment TV channel, Zee World, which also signed an extraordinary agreement with Shalina Healthcare at the event. While speaking on the partnership, the Regional Representative of the TV channel, Rohit Nagpal said the channel is glad to associate with Shalina Healthcare. They intend to bring the best out of the partnership through the premier of the maiden edition of the “Dance Africa Dance”.

Responding while signing the contract papers at the event, the brand ambassador, Broda Shaggy, used the opportunity to thank the company for recognizing and appreciating his talents. ” I see this as a big opportunity to reach out to my teeming fans and followers in a special way. I am incredibly happy when you called me back and I promise I will do more. Malaria is an unfortunate experience in our society, and I am elated to join the company in this campaign to knock it out.” He said. Shal’Artem Tablet manufactured by Shalina Healthcare is a prescription medicine that is used to treat acute and uncomplicated plasmodium falciparum malaria infection in patients weighing 5 kg (11 lb) and above

All You Need To Know About All The BBN Housemates