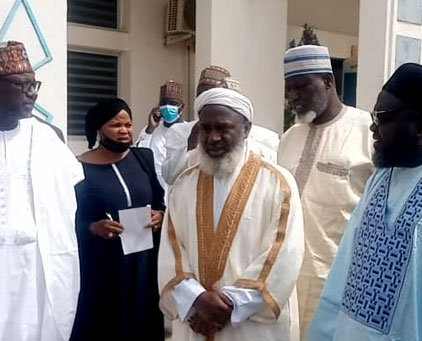 By the Grace of the Grace, Sheikh Ahmad Gumi has come under intense criticism over the news in recent times for sensational statements he made over criminal activities of Fulani herdsmen, terrorizing some states in the nation. Satguru Maharaji Ji, speaking in an interview on Channels Television’s “Politics Today” Programme, said the statement credited to Gumi among other things that the “Fulanis were only on ethnic revenge, by engaging in kidnapping to make money and they have nothing like civilization other than the AK 47 guns that they carry.”Though the situation is tense, but the solution is simple, Maharaji Ji said what the Fulani needed was negotiation and the teachings of Islam… interesting to say the least.

“In the light of the above, who is to blame for Fulani’s lack of civilization and who gave them the AK 47 and employed in the ethnic revenge mission?

Maharaji Ji said it was, indeed nerve-wracking for anyone in his right senses to make such reckless statements that reflect. ethnic, cum religious biased statements, coming from this particular Islamic clergy should not be a suffice to say, like father, like son. It is common knowledge that, like his father, late Sheikh Abubakar Gumi, an Islamic cleric popularly known for making infamous and far-reaching statements that were capable of inciting Muslims to violence and radicalising the youths, all in the name of Allah. It will be recalled that Sheikh Abubakar Gumi, as a leading star of the Kaduna Mafia, once vowed that “no Southerner would rule Nigeria in his lifetime.” Pastors T.B Joshua and Adewole who were under the spell of the Kaduna Mafia were drafted to Aso Rock Villa to confuse General Sani Abacha to death through his self-succession bid, rather than invite Maharaj Ji to help him form a government of national unity.

But what happened later is now history! We all witnessed the historic May 29, 1999, Presidential inauguration that made Obasanjo, a Southerner, President of the Federal Republic of Nigeria and true to his vow, Abubakar Gumi never lived to witness that epoch event. Though there are challenges, a new Nigeria is now in the making, by the Special Grace of Maharaj Ji.

To this end, I question the rationale that South-West, South-East and South-South believing that we are all political actors, who play by the rules of the Constitution of the Federal Republic of Nigeria to ensure freedom of expression, movements and association, within the ambits of the law, despite the I don’t care attitude of Northern elite.

It will be recalled that Gumi is an ally of Umar Farouk, the underwear” Christmas bomber” who dented Nigeria’s image internationally, through his botched attempted bombing of an aircraft bound for Michigan, the USA in 2009. Farouk. He allegedly had links with Sheikh Gumibecause his phone contact was not only found with him, but he also confirmed Gumi to be one of his associates. I wonder why, up to this moment, we don’t know why Ahmad Gumi is yet to face criminal trial in the court of law. Lest we forget, “what you sow, you reap.” My only fear is that we are sowing seeds of deceits in our youths, telling them they can as well eat their cake and have it!

This same personality, Ahmad Gumi, is now on negotiating table with Fulani bandit group leader, Dogo Gide and his group for kidnapping students and members of staff of Government Science College, Kagara in Niger State. This absurdity is really worrisome!

Is this not mortgaging the conscience of our youths? Invariably, teaching them, it is okay to take arms against the state and that they would be rewarded and given recognition for their grand schemes, and plots. Besides, Maharaji said that  Gumi lacked conscience for going as far as negotiating terms of exchange prisoners of terror for the lives of innocent school children. This measure could be likened to wanting to kill a phyton with fresh eggs, it will only serve as nourishment for it to feed fat! Are we prepared for the unseen consequential aftermath of our actions today?

So, we are begging, that steps should be taken to arrest Gumi, for aiding and abetting banditry and terrorism in the land. Gumi is not a patriot and his actions and utterances negate our cherished dream of the Nigerian Project.

From the foregoing, it is evidently glaring, that Sheikh Gumi is among the members of the terrorist group enjoying privileges and sympathies from the ignorant ones who are not privy to their ploy. He should be arrested now and treated as a terrorist because he is a threat to national security.

Maharaji Ji, therefore, strongly advised that Nigeria should embrace, Africanocrazy and jettison the ways of these colonial renegades of old, because though they may have changed their coats, but they still share similar concepts and ideologies.

READ ALSO: SEE THE GLAMOROUS WOMEN WE WROTE ABOUT 25 YRS AGO

See The Glamorous Women We Wrote About 25 Yrs Ago