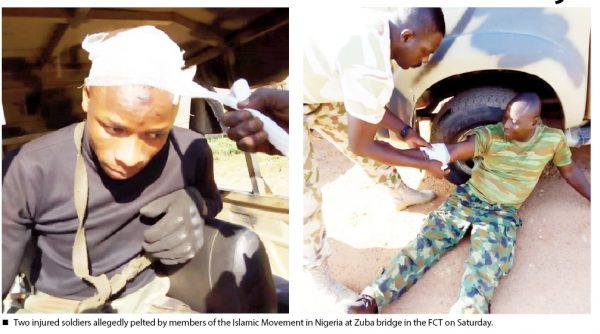 Not less than six people were reportedly killed and 10 others injured during a clash between soldiers and members of the Islamic Movement in Nigeria (IMN), a Shiite group, in Zuba, Abuja.

The Shiites were staging a procession to commemorate the Arbaeen (which they hold 40 days after the Day of Ashura) when the clash occurred.

The Nigerian Army said the soldiers were escorting ammunition and missiles from Abuja to Army Central Ammunition Depot in Kaduna State when they were attacked by some members of the IMN around Zuba bridge, Abuja around 3 pm on Saturday.

He said when the troops attempted to clear the roadblock, they met stiff opposition from the sect, adding that members of the sect used various objects to barricade the road and also pelted the troops with stones and other dangerous items.

He said they also attempted to overrun the escort to cart away the ammunition and missiles the troops were escorting.

This he said, “led to the troops opening fire to extricate themselves.”

He noted that troops of 102 Guards Battalion in whose Area of Responsibility the incident occurred rushed to the convoy’s rescue.

He said, “Unfortunately, during the encounter three members of the sect were killed, while two soldiers sustained various degrees of injuries.”

However, a leader of the group in Suleja town of Niger State, Aliyu Umar, told our reporter yesterday that their procession started peacefully from the town with members from other states in attendance. He said the soldiers attacked them at an open field where they converged for closing prayers around 2 pm.

But the group leader said they did not block the highway, adding that the members pelted the soldiers with stones after they fired shots against them.

“We took three dead bodies to Suleja while leaving the scene. Later that night, we went to the Zuba police division where another three bodies were handed to us by the police.”

When contacted, the DPO of Zuba, CSP Fodio Sani, confirmed the incident but said he could not confirm the death of an additional three persons apart from the three handed over to the group.

He, however, said 10 people were injured, adding that the police took eight of them to the University of Abuja Teaching Hospital in Gwagwalada for a referral from the Suleja General Hospital, where they were earlier taken to by the group.

PSL Is A Foundation Out To Support...