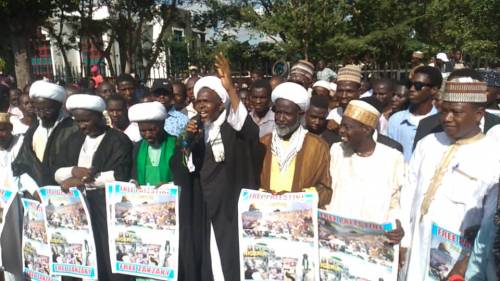 The Islamic Movement of Nigeria (IMN) otherwise known as Shiites has set the national flags of the United States of America (USA) and Israeli on fire during a massive protest to call for the release of the leader in Abuja.

The protesters who converged at the Wuse Market junction on Friday where the protest was terminated described the US and State of Israel as enemy and oppressors of Palestine.

The flags which was concealed in a polythene bag were brought out at the full glare of the crowd with the caricature of President Donald Trump and set on fire at the junction of the market leading to a traffic logjam in the area.

The movements protest is to drive home their demands for President Muhammadu Buhari to release Ibraheem El-Zakyzaky to enable him to seek medical attention.

The group vowed to continue with the protest irrespective of the intimidation by the security agents.

The Secretary of Academic Forum of the movement, Abdullahi Musa said that the decision of the President not to release him negated the principle of rule of law.

He added that several courts of competent jurisdiction have ordered the release of their leader but the Nigeria government continued to keep him in the custody without no reason.