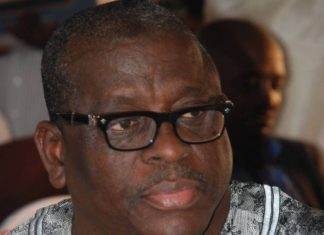 The news of the death of the immediate past lawmaker, representing Ogun East Senatorial District at the National Assembly and the governorship candidate of the People’s Democratic Party (PDP) in the 2019 election, Senator Buruji Kashamu, has come as a shock to many Nigerians.

According to report, Buruji dies after battling the deadly COVID-19 virus.

More shocking is the significance of the day he had died.

Exactly a year ago, August 7, 2019, the senator lost his mother, Alhaji Wulemotu Kashamu.

The remains of the late Alhaja Kashamu was commited to mother earth by 2:00p.m exactly a year today, 8th August, 2019, in Ijebu-Igbo, Ogun State, according to Islamic rites.