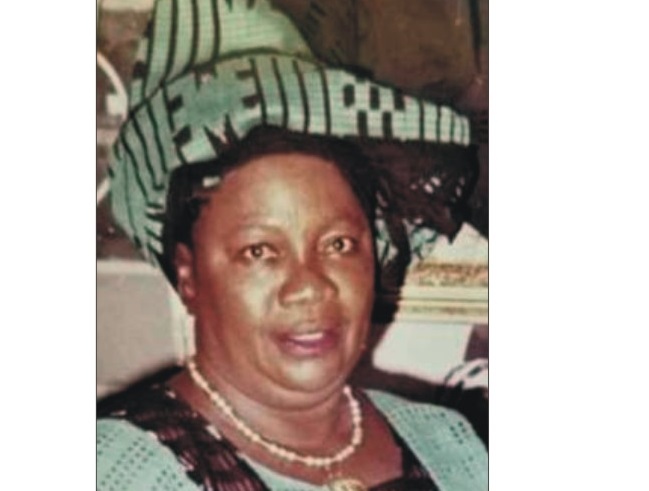 The International Conference Hall inside the University of Ibadan stood still on Saturday 28th of April 2018 as the popular Alubankudi family of Ijesha threw a classy final burial for their Mother/Grandmother, late Alhaja Sariyu Alubankudi. The event which was a white and gold affair witnessed an array of many prominent socialites who came to show love to the Alubankudis of Ijesha who are very popular in Ibadan. City People Assistant Society Editor, ABIOLA ORISILE was at the event to serve you the hot gist.

ALL YOU NEED TO KNOW ABOUT LATE ALHAJA SARIYU ALUBANKUDIS

The Alubankudis are from Ilesha but they are very popular in Ibadan. As a successful businessman in the 80s, the patriarch of the Alubankudis, late Yaya Alubankudis was one of the popular men in old Gbagi market who sold fabrics back then. He ran a popular Kudi store in Gbagi, Ibadan. His wife, late Alhaja Sariyu also sells fabrics and Gold. She was very popular among the South-West rich in the 70s and 80s. She sells gold and fabrics and she was one of those who sell Gold for Late HID Awolowo. Though the Alubankudis are very popular in Ibadan, they are Ijeshas who used to do business in Kano before they moved to Ibadan. To say that Mama Sariyu who died few weeks ago is blessed is an understatement. This was obvious at her burial as all her children made sure their mother had a befitting burial.

Late Alhaja Sariyu Alubankudis was survived by 6 successful children who are all doing so well in their chosen careers.  They were led to the event by Fatimo Omotosho, Mama‘s first born who is a top fabric merchant in Gbagi market in Ibadan. She was not alone as she led her other siblings to the event. Rasheed is Mama’s 2nd child and he owns a Mega Block industry. Tajudeen Alubankudi is  America  Based while Misturah is  based in London.  Sikiru Alubankudi flew in all the way from Spain with his guest while Alhaja Basira Alubankudi who owns Anuoluwa tradition store and blocks industry in Ibadan also came with her large guests.

Popular Luxury shoe seller, Yetunde Alubankudi who runs Yenneti Luxury in Lagos and Ibadan and her younger sister, Tinuke were at their best at their grandmother burial. They came out with their large guests while their seats were filled with prominent socialites of notes. Yetunde Alubankudi who was cynosure of all eyes with her darling husband, Goke Adeyemi, an industrialist and technocrat  who looked handsome as he as they attended in company of his friends. Many Ibadan big babes also came out to support Tinuke Alubankudi because she is one of the happening young successful babes in Ibadan.

WITH LOVE FROM SOCIETY WOMEN

WHO IS IBADAN’S RICHEST SOCIETY WOMAN?

It was an array of many successful businessmen who all came to support all the husbands of Mama’s children. Many of their guests spent many hours before they left while they honoured all Mamas children with crispy naira notes. Among those sighted were Retired AIG, Tunji Alapini, Uncle J.T, Alhaji Lukman Gabdegesin, Alhaji Tunde Ologburo, Oyo Commissioner of Police, Mr Adeyemo, Omojolade Jayjay, Asiwaju Bodija, Chief Deji Osibogun, Justice Taiwo Taiwo, Lekan Bello, Hon Adebayo, Mr Famuyibo, Adisa Oris, Hon Odubela and many others.

AND K1 PUBLICLY SHOWED LOVE TO WIFE IN IBADAN

The king of Fuji, King Wasiu Ayinde Marshal and his wife, Hajia Titi Marshal were cynosure of all eyes when they walked into the well decorated hall at few minutes past 3pm. Many of the guest’s couldn’t take their eyes off this celebrity couple as K1 walked his wife to the seat. Of course K1 was the official musician of the day and his pretty wife, Titi is one of the close friends of Yenneti. K1 dazzled many when he publicly showed love to his wife again at few minutes past 4pm. He sang many exciting songs through special explaining why he married his wife as he gave her many accolades. His beautiful wife who hardly dances took to the dance floor as she  grooved to the music of her darling husband who addressed her as his “transformer“.