Home News The Other Side Of Gov. AYO FAYOSE Revealed!
News

The Other Side Of Gov. AYO FAYOSE Revealed! 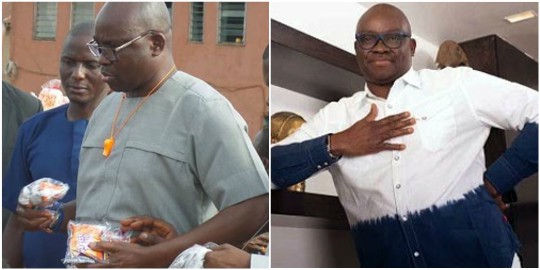 Popularly called Oshoko by his teeming loyalists, the Governor of Ekiti State,Ayodele Fayose wields enormous support and followership from the people of Ekiti. He has a very strong and fierce personality but many people do not know that he has a calm nature towards women instead of his regular stern and tough personality many know him for.

Easily not defeated and worried over his many political travails,Governor Fayose is well loved by many people. It is not usually common to see the romantic side of Gov Fayose especially towards his wife of many years but we can tell you that asides the tough Governor he is perceived to be, he enjoys a very cordial closeness with his wife, Feyisetan of 29 years.He never hides his affection for for her anytime he is talking about her. He praises her, pledges his love to her and always reels out various qualities a good woman like his wife possesses. He has made the public to understand that his wife is the pillar and prayer warrior of the Fayose close knit family.

One of such event was few days back when he attended the 17th National Women Conference in Lagos and his presence generated a wild applause. He was made to give a short speech and greet the women, after acknowledging the wife of the Vice President, Dolapo Osinbajo who was the mother of the day. In his words, Your Excellency, the wife of the Vice President, let me stand on all existing protocols and convey the good wishes of the people of Ekiti state particularly my wife who has asked me to tell you that she would be in Calabar but can not make it here today but because I am in Lagos,I want to admit that I am standing in for her too.

There is nothing too much to make confessions, I want to appreciate God for the Governor of Lagos State, and the good people of Lagos State. They have not been inviting me, but now that they have invited me, in and out of office,I will always be here to be part of this great event. Let me close by saying this, a life without women is a life full of crisis, if you put women on the drivers seat, this country will turn around,consciously we must make effort to develop women. In my state, when we conduct elections in local government, I made it a principle that if women score 40 percent and men score 60 percent, women will win So we must adopt this all over to encourage women because our problems are not the women but the men who believe women should be second fiddle. But I am sure Governor Ambode is turning things around to make life better for women. Once again I celebrate and congratulate you”.

He got a standing ovation with his short but powerful speech which shook the entire auditorium.This is one of the many open confessions of Governor Ayo Fayose to his lovely wife, Feyisetan. Let’s remind you that few months backs when his wife turned 52, the governor wrote a romantic congratulatory message to mark his wife’s 52nd birthday, Fayose described his wife as the positive force behind his political successes. Fayose said of his wife, “She has distinguished herself as a role model. A person who believes in modesty and totally reserved. Her prayer life has made a difference and has impacted positively on me.

Any woman that marries a man like me, who is generally seen to be fearless and courageous and who is vulnerable to attacks by political opponents, cannot afford not to have a woman with her sterling qualities as wife. Only a virtuous, Godly and resolute woman like her has what it takes to stand firm in the face of attacks. “I appreciate her as she adds another year and also appreciate her care for our children. God has brought her to this kingdom at this auspicious time when many supposed men of honour have disappeared into the thin air.

“I want to assure her that her labour of love will not be in vain. She is a woman to emulate for her modesty and inspiration and fervent prayer life and only her can be an ideal wife for a man like me,” he said. While eulogising his wife, fayose described her beauty as internal, according to him, “she neither wears ear rings, nor make-ups, always on her knee, manning my back and the home fronts”.

Their marriage has lasted 29 years and still waxing strong. They got married on December 19, 1988. Feyisetan was 24 years old, while her husband was 31 years old when they got married.The very modest Mrs Feyisetan Fayose is also a philanthropist and an human right activist. Feyisetan Fayose was born January 8 1964. She is also the grand patron of Ekiti State chapter of National Union of Female Journalists. Fayose and his wife Feyisetan are blessed with 5 handsome children, who are all boys. They are Joju, Rogba, Tomiwa, Nigba, and Boluwatife.

The Other Side Of Gov. AYO FAYOSE Revealed! was last modified: November 2nd, 2017 by Tayo Oyediji