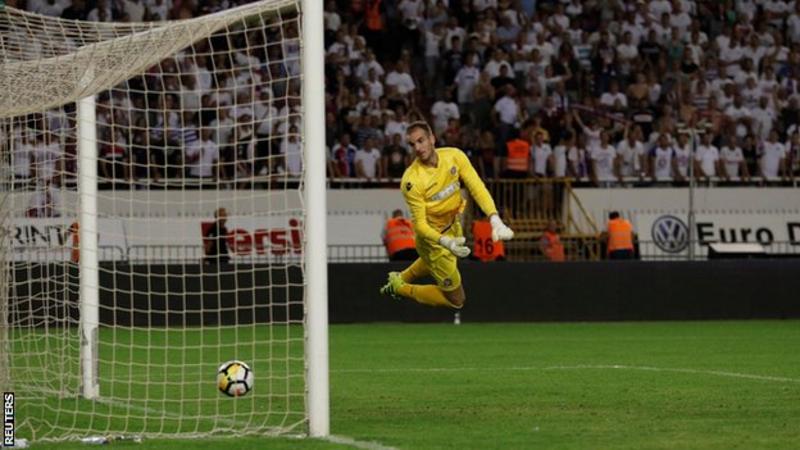 Gylfi Sigurdsson opened his Everton European campaign debut with a 50-yard wonder-strike as Ronald Koeman’s side beat Hajduk Split 3-1 on aggregate to reach the Europa League group stage.
With a 2-0 advantage from the first leg, Everton hopes looked shaky when Josip Radosevic unleashed a wonderful, swerving shot from 35 yards beyond Jordan Pickford.
However, Sigurdsson, making just his second Everton appearance following his £45m transfer from Swansea, put even that superb strike in the shade just 14 seconds into the second half.
Picking up a loose ball on the right of the pitch, just a few yards inside the Hajduk half, the Iceland midfielder fired an effort high towards goal and over the frantic reach of the back-pedalling Dante Stipica.
Sigurdsson’s moment of brilliance left Hajduk needing three goals to progress and silenced the hitherto boisterous Stadion Poljud.
The hosts might have got one back when Ashley Williams fouled Ante Erceg in the area and the referee pointed to the spot, but Pickford – another big-money summer addition to the Everton ranks – got down low to his right to keep out Ahmed Said’s penalty.
Wayne Rooney, named in the starting XI a day after announcing his international retirement, had a chance to win the match on night for the visitors but goalkeeper Stipica saved.
Everton will know their group-stage opponents when the draw is made in Monaco on Friday (12:00 GMT).

UBA Bans ATM Cards Use for Betting, Jewellery Purchase, Others