Why Simi wants to block her mother from Instagram 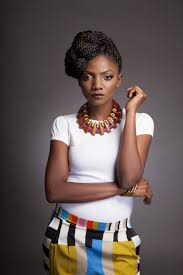 Poplular Nigerian singer, Simisola Oguleye is well loved and has a large fan base, not just because of her music, but as a result of how real she is(personalty wise).

Simi regularly intimates her fans and followers of happenings in her life via her social media accounts like other celebrities do but the way she does it is what has endeared her to a large number of people.

The singer who is also a song writer is known to enjoy a very close relationship with her mother but recently she threatened to block her from photo and video sharing app Instagram.

The recently married mum, commented on one of her photos asking her to bring the blouse she was wearing because she wanted to slay in it for her husband.

This made Simi issue her an immediate threat!

The 29 year old who is the last of four children started off her career as a gospel musician, and her career came to spotlight in 2014.

Why Simi wants to block her mother from Instagram was last modified: March 23rd, 2018 by Igbokwe John