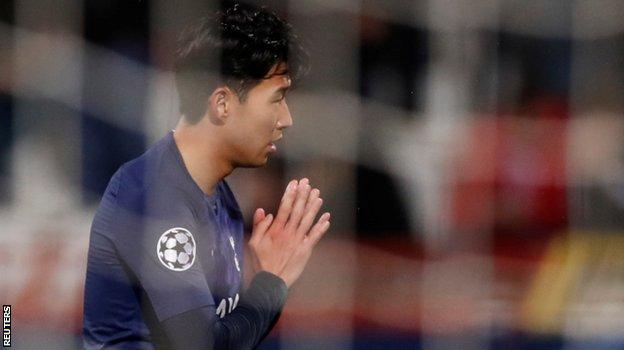 Son Heung-min scored twice following a difficult few days to take Tottenham towards the Champions League knockout stages by thrashing Red Star Belgrade but the talking point was his apology for tripping Gomes in the 1-1 draw at Goodison Park on Sunday, after the first goal.

Spurs lie second in Group B, four points clear of Red Star in third, knowing one victory from their final two games will ensure progression to the last 16.

Forward Son, who was left “devastated” by his foul that led to a horrific ankle injury for Everton’s Andre Gomes on Sunday, netted twice in the second half, lashing home a finish from an angle and tapping in from close range.

The South Korean did not celebrate his first goal; instead, he clasped his hands and bowed his head.

Mauricio Pochettino’s side went ahead in the first half courtesy of the impressive Giovani Lo Celso, who clipped home a finish on his first start for the club following an almighty goalmouth scramble in which Spurs hit the post and bar. Christian Eriksen added a fourth late on.

Red Star had chances of their own but could not find a way past Paulo Gazzaniga, with the Spurs goalkeeper saving sharply off Milan Pavkov and Rajiv van La Parra.

It was Spurs’ first away win since their thrilling Champions League semi-final comeback against Ajax last season.

Tottenham’s overall form this season has been poor, losing four of their 11 matches in the Premier League and suffering a 7-2 humiliation at home by Bayern Munich.

But the north Londoners have recovered from that demolition in outstanding fashion, scoring nine goals in back-to-back games against Red Star.

Their victory in Belgrade was all the more impressive as the home side tend to provide a stern examination for the visitors, losing just twice in their previous 21 games in Europe at the Rajko Mitic Stadium, including an impressive victory over eventual winners Liverpool last season.

Son was sent off for tripping Gomes in the 1-1 draw at Goodison Park on Sunday and was visibly distraught by the injury but Pochettino said he was “in a very good way” to play and his two goals showed it.

READ ALSO: “I DON’T BELIEVE IN PRAYING FOR MY ENEMIES” – ACTOR, YUL EDOCHIE