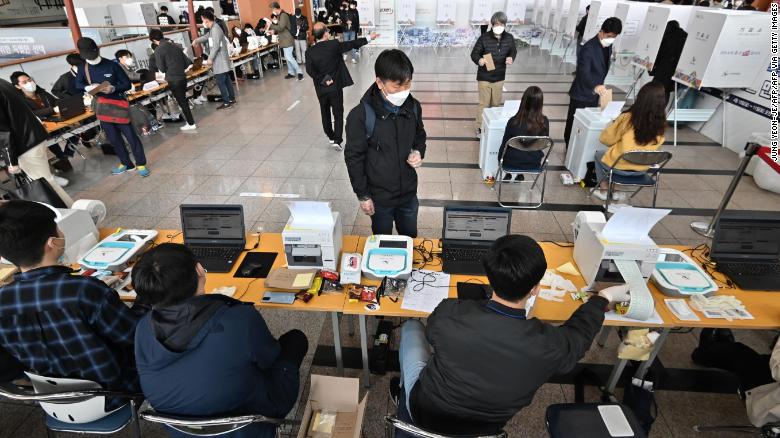 South Korean voters turned out in force Wednesday despite the coronavirus threat, putting on compulsory face masks and gloves to cast their ballots in a parliamentary election.

South Korea is among the first countries with a major virus outbreak to hold a national vote since the global pandemic began, and a raft of safety measures were in place around the poll.

Voters in obligatory masks lined up at least one metre (three feet) apart outside polling stations and had their temperatures checked before being allowed in.

All had to clean their hands with sanitiser and don plastic gloves, while those with fevers cast their ballots in separate booths that were disinfected after each use.

“Because of the coronavirus, people are keeping their distance and everyone is wearing gloves.”

For a time, the country had the world’s second-largest outbreak, before it was largely brought under control through widespread testing and a contact-tracing drive, along with widely observed social distancing.

Those self-quarantining at home will be allowed to vote immediately after the polls close at 6:00 pm (0900 GMT), as long as they do not show virus symptoms, and must return to their residences by 7:00 pm.

Special polling stations were set up at eight central quarantine facilities at the weekend to enable the confined to vote.

But anyone who is staying at home and has developed symptoms is effectively disenfranchised.

Campaigning was also affected by the outbreak: instead of the traditional handshakes and distributing of name cards, candidates kept their distance from citizens, bowing and offering an occasional fist bump.

Many turned to online media such as YouTube and Instagram to connect with voters, while some even volunteered to disinfect parts of their constituencies.

A survey conducted by Gallup Korea last week showed that 27 percent of respondents were reluctant to vote due to the epidemic.

But 72 percent said they were not worried, and a high turnout had been expected after 11.7 million people, including President Moon Jae-in, voted early over the weekend.

Turnout had reached 56.5 percent at 3:00 pm, 10 percentage points up on the same time at the last parliamentary elections in 2016.