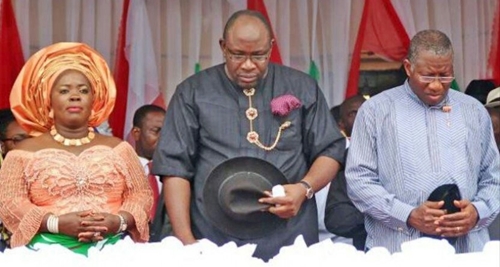 The Bayelsa State Governor, Seriake Dickson, yesterday defended the comments he made on the last six years of an Ijaw presidency and on the lack of commitment from representatives of the state at the federal level, insisting that he stood by his comments.

The governor had lambasted those who have held positions of authority from the state at the federal level, stressing that the last six-year opportunity to lead the Ijaw people out of its current doldrums was wasted.

Dickson, who spoke while addressing the board and management of the Niger Delta Development Commission (NDDC) led by the chairman, Victor Ndoma-Egba, however maintained that the remarks were not targeted at anyone.

Expressing concern over “the way and manner it was misinterpreted in some quarters”, Dickson said only those with ulterior motives could have engaged themselves in doing so.

A statement by the governor’s Spokesman, Daniel Iworiso-Markson, said that Dickson maintains his stand “which chided those who had the opportunity but could not use it to develop the state”

The remarks during the last Adaka Boro day had sparked a heated debate between supporters of the governor and that of former President Goodluck Jonathan, who felt the governor was referring to the ex-president.

He charged the new NDDC board not to follow the same path as the Niger Delta region, lamenting that more than 60 years after oil was first discovered in Bayelsa, most of the communities do not have basic amenities.

“Till today, 61 years after the discovery of oil and gas, there is no road to get to Brass Oil terminal, and even as we speak, that is where oil is being lifted day and night.

“No road as we speak to Oporoma, Koluama. We are not a happy people. No investment on human capacity development.

“Young people from our region have all become militants who carry AK-47 rifle and these are young generation that should have helped develop our land which we have now lost,” he said.

He continued: “The only thing they are good for is to struggle for surveillance contracts while others smile to the banks locally and internationally. People flaunting oil wells and parading wealth rooted in oil wealth acquisition.

“What people who sit in Abuja call oil blocks are ancestral properties of people of the Niger Delta”, he posited.

Dickson promised to partner the commission and advised that they should concentrate on critical projects in the state and leave the building of schools and health facilities.

He pointed out that one of the greatest challenges the NDDC has always had is politicizing its activities to suit the whims and caprices of some individuals.

“We should avoid over-politicisation of the NDDC. One of the greatest problems that have faced the NDDC is the issue of political interference.

“I want to use this opportunity to call on the federal government and its officials to allow this board that they have constituted to work and not to interfere and use the NDDC as a cash cow to fund politics and political activities and as an avenue for political patronage. The NDDC should be allowed to face its primary mandate”, the governor noted.

Ndoma-Egba, in his comments listed some of the challenges of the commission and plans to ensure real development in the region.

Ndoma-Egba regretted the derailment of the commission from its core mandate and assured that the NDDC under his leadership would restore its core mandate of developing the region. He promised to restructure its balance sheets, reform the NDDC structure and return it to “what is right, just and fair”.

Meanwhile, for claiming that the Jonathan administration did nothing for the Ijaw, a Niger Delta rights association, the Movement for the Sustainability of Ijaw People, has warned Dickson “not to tow the path of a traitor by seeking to bite the finger that fed him.”

In a press statement issued this yesterday, Tonbra Ebitimi, the National Leader of the group described Dickson as “an overtly too ambitious lesser star who disparages the former President, while pretending to love him.”

“We believe that only a stone-hearted traitor would move against a man who regularly comes to his rescue in times of danger,” said Ebitimi.

The group further compared Dickson to Brutus, a villain who dealt Caesar the deadliest blow from his hidden hand, while pretending to be a friend.

“Initially, we did not believe that such toxic arrow could be shot from the bow of a political godson in the direction of his highly revered mentor and fellow kinsman. But having waited for about two days for Dickson’s clarification or rebuttal to no avail, we have no choice but conclude that the attack was a carefully orchestrated denunciation trained to achieve a desired end.

“We suspect that the aim was to rubbish the achievements of the Jonathan administration, pull down its vestiges and damage the former President’s persona as a prominent Ijaw leader.”

The group noted that the statement was one Dickson shouldn’t have made, no matter the weight of the disdain and grudge he nurses against the former President and his immediate family as no other politician or governor had attacked Jonathan in a similar way.

“Those other governors did not descend to the gutter like Dickson did; not because of their love for the former President, but because their conscience would not let them lie against Jonathan, by describing his time in office as wasted, like Dickson did.

“It is instructive that Dickson is not only Jonathan’s godson but the governor of his state! Ordinarily, he should be the one to rise to Jonathan’s defence in all circumstances, even when others are criticizing him. Unfortunately, the reverse is the case. Like Brutus, his knife is the first to go in.

“But does Dickson really have any good case against Jonathan? We don’t think so because we are all witnesses to the successes recorded by the Jonathan administration towards not only advancing the cause of the Ijaw, but also working assiduously to make life better across the country.

“We are also aware of how much the former President boosted Dickson’s political career by supporting his gubernatorial ambition while still President. Even out of power Jonathan gave his all to team up with Dickson against a very formidable opponent; an unconditional support that helped him win a second term.

“We will not condemn Dickson. But we won’t hesitate to let him realize that the unkindest cut, the ultimate treachery is usually not from the enemy. It is the blow thrown from the hidden hand of the one pretending to be a friend. We can only warn him that Karma rewards every man according to his deeds,” the group stated.

I stand by my comments on wasted Ijaw presidency – Dickson was last modified: May 20th, 2017 by Arinze Ago