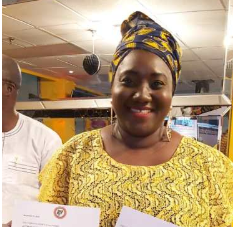 These are good times for Olori Funmilayo Adedeji, a professional Nolywood actress based in Canada, as the Theatre Arts and Motion Picture Practitioners Association of Nigeria (TAMPAN) has unanimously elected her as the Vice President of the highly revered association, Canada Branch.

The Start actress took to her social media handle to announce the great news.
She wrote:
Its official, Olori Funmilayo Adedeji Vice President of TAMPAN Canada chapter. Just an hour and privilege that I will not take for granted. Good morning house. Have a fruitful week”, she wrote.

The president of the association, Bolaji Amusan, while presenting her with the certificate of return for the unopposed election she won, expressed his confidence in her lift the association in Canada to an enviable position.