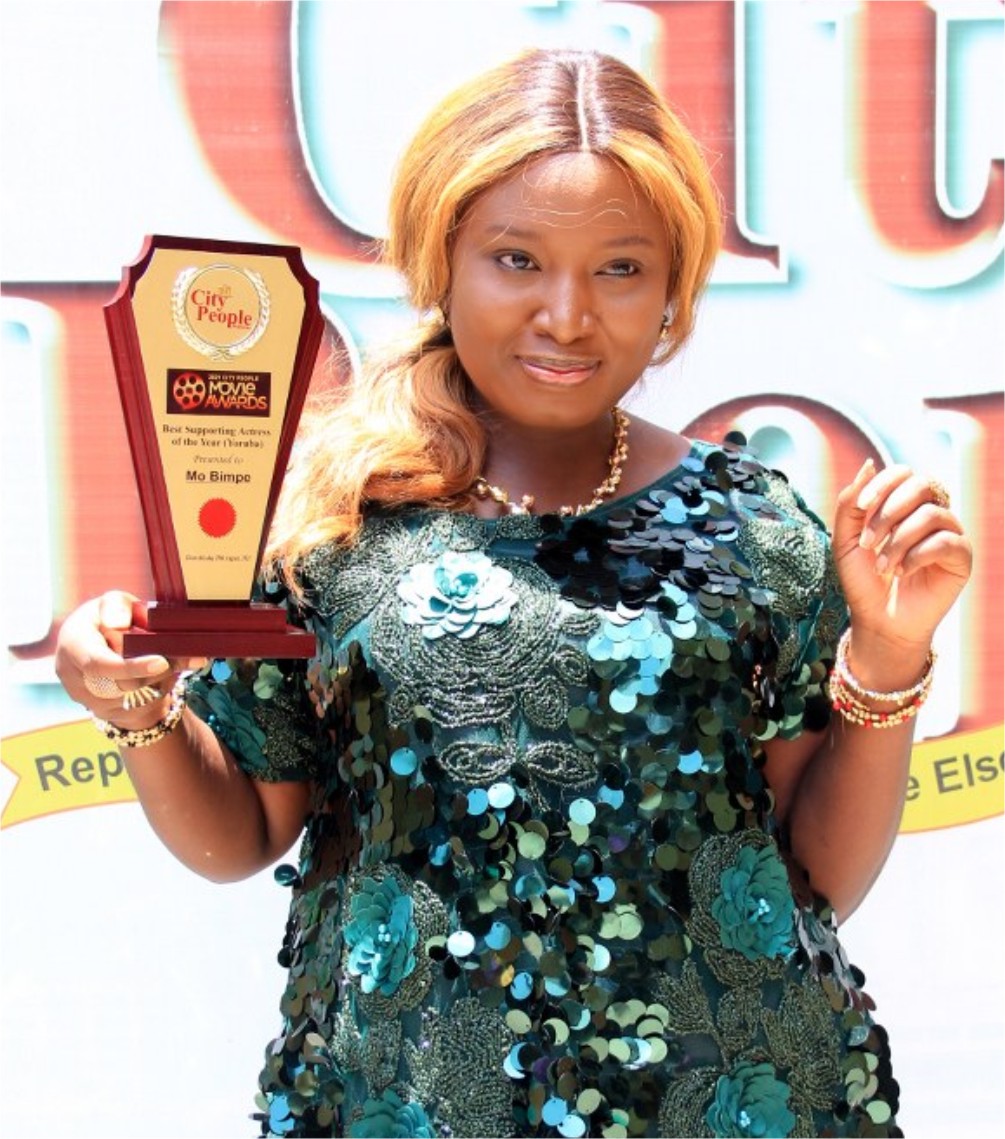 •Says: I Am Engaged

At the last 2021 City People Movie Awards held in Lagos, star actress, Mo Bimpe emerged the Best Supporting Actress (Yoruba). But she was tied up on location, so she couldn’t make the event that took place in Abeokuta.

Last week, she came to the City People office at Gbagada, Lagos to pick up her award and for about 1 hour she spoke to us about her exciting career and her many controversies. Adebimpe, who is a princess from Ijero, a town in Ekiti, has been able to remain consistent ever since she made it to the limelight a few years ago.

She has also continued to put her fans and followers in confusion over her supposed relationship with Nollywood actor Lateef Adedimeji. Apart from acting, Adebimpe is the brain behind the Moluxury brand, which is basically into Fashion.

Adebimpe is the last child in a family of 5. She went to Asset College and Omolere school for her secondary education. She went on to study English at the Ekiti University EKSU. The talented Yoruba actress kicked started her career as a model and worked with top brands such as House of Tara, Glam Cosmetics, among others.

Adebimpe, however, started her acting career in Nollywood in 2016 and landed her first role in the movie “Agbede Meji”, produced by Yomi Fabiyi. The same movie brought her to the limelight. Since then, she has acted in over 50 movies in the Yoruba niche.

How do you feel about receiving City People Movie Award for Best Supporting Actress (Yoruba)?

I feel delighted, I feel honoured. We are just doing our thing and City People is a platform that appreciates our hard work and its good that we are being appreciated because those are the kind of motivation we need to keep us going

For how long have you been into movies and how did you fall in love with acting?

I have been in the industry for almost 4 years now. After my first movie feature, the acceptance from my family, friends and fans were amazing so I felt I should do more of it. It was ‘’Agbede Meji’’ by Yomi Fabiyi. I was the lead cast with Gabriel Afolayan and that was my first movie.

What were you doing before acting?

Before acting, I was serving in the NYSC in Benin and I was into modelling while serving. I did not know I was going to act because after serving I was going to travel out. This audition came and I sent my video, I was supposed to record 2 monologue videos and send mine to the producer then I was chosen. I had been a model since my time in school

I was born in Akure though I am from Ijeru Ekiti State but I grew up in Akure. My tertiary education was in Ado Ekiti in JUNAD which is now EKSU where I studied English.

How was the transition from modelling to acting like for you?

It was different for me because acting is a lot more challenging than modelling. For modelling when you have the attitude and beauty you can do it but acting takes talent and hard work though modelling takes hard work but acting is just a different ball game entirely.

How did you overcome ‘’sex for roles’’ in the movie industry?

Maybe I did not go through the things people went through because I went through an audition. After the movie, I went back to Benin to continue serving. After my NYSC ‘’Agbede Meji’’ came out and people started saying how much they liked the ‘’Onike’’ girl in the movie and wanted to meet me. I had even forgotten about the movie and even though I did not do well in the movie because it wasn’t something I wanted to do. It is just God’s grace. So after the movie came out I decided to produce a movie and it was well accepted. It was ‘’Dear Sister’’ that featured Ninolowo Bolanle, Opeyemi Aiyeola, Niyi Johnson, Yinka Quadri and a lot of big actors. That was the motivation and people kept on encouraging me. I have released like 8-9 movie movies. I produced Dear Sister, Entrapped, Jade’s cross, Adebimpe Omoba, the Cokers, 0707, Resentment and All my Life

I have always liked storytelling all my life because my father is a historian, he likes telling stories. He would call us and tell us stories so I got that gift from him. Even before joining the industry, I loved writing so when I joined the industry it was easy for me to write and produce when the movies come out people love them so I would always like to do more.

What is your relationship with your colleague Lateef Adedimeji?

I am in a relationship because I am not a child and I am engaged. Lateef Adedimeji is just a colleague I met almost immediately I joined the industry and we clicked. While we worked on my 2nd movie Entrapped we got close on set. We started working together because when we work together people love the outcome. I work with a lot of people but with him it is different. People want us to work together. Since I write my movies started featuring him in all my production and right now he handles all my production and the coordinator so he is in my circle and a close friend.

What was your reaction to the reactions on social media after a picture of you in wedding dresses with Lateef Adedimeji broke out?

That was just a coincidence, when we put out things people take it the wrong way. I put out things with other people like Jide Awobonor he is close to me too. I put out things about him but it is not like with Lateef Adedimeji. Whatever we do goes viral. That was a wedding photoshoot for brands, different brands came together to pull that out and it went viral.

Does he have the quality in your kind of man?

How do you draw the line between you the person and you the star?

How did you cope with the controversy involving you and Yomi Fabiyi?

Yomi Fabiyi was my first Producer and we don’t relate now because we have had issues right from that set. We shot that movie for 7 days in Abeokuta and he asked me to follow him to Ikorodu, I refused and he said that is how it is done in the industry that I have to follow him home. I had never been to Ikorodu so I left for my house in Omole Phase 2 in Lagos. Since then he blocked me and that was it. When I wanted to produce my first movie I reached out to him to be the Producer, he said I should meet him at a hotel or his home with my script but I suggested we meet in a public place but he insisted. That was what happened between me and Yomi Fabiyi. It is not something I would hide; before now I did not really like to address it but he keeps saying stuff so if I don’t talk people won’t know what happened so he is always like I am an ingrate or stuff and I cannot even be an ingrate because everyone I started with is still there like Lateef Adedimeji, Corporate Pictures, Kehinde Adeyemi and everyone. He is the only one and that is because he doesn’t want to associate with me if I don’t give in to whatever he wants and I won’t give in.

How do you cope with the expectations from your job being an introvert?

Lately, I have attended a movie premiere by Toyin Abraham because she is my God Mother; some people are closer to me and special. Like Biola Bayo, her wedding was my first Owambe since I joined the industry because she is someone I care about. I think people just understand me because they don’t invite me to parties so it’s okay.

What has stardom taken from you?

How have you coped with male advances?

As a woman, we know how to handle that part and as a woman it is normal. Even when I was younger there had been advances and even before I joined the industry. This is something we have to keep dealing with even after getting married now that I am single so why won’t a man approach me. It’s normal and I don’t feel like it is a problem.

She is a quiet person; she is shy and an introvert. That doesn’t mean I cannot be MC an event even though I have not tried it before. It is something I would like to explore that part. If I can act why can’t I? Because I am a different person in front of a camera so I feel like I can do it. But I like to take my time when I want to try new things, even with acting. I feel like you don’t have to do plenty of things at a time.

When you see young people aspiring to be like you what would you tell them?

I tell them not to give up because if you want to be anything in this life you can if you work hard. There is nothing you cannot achieve as long as you put your mind to it and you keep working and praying towards it, because I feel like if I can do it then you can because I did not know anybody in the industry. It was the acceptance from my fans and God. If you want to become someone tomorrow don’t give up even if you don’t know anyone. When I was working as a model I wanted to be on a billboard and all and I look at myself today. I feel like a lot of people should believe in themselves more

Before coming to the limelight in the movie industry, who were the people you liked in the industry?

I loved Opeyemi Aiyeola, Toyin Abraham, Odunlade Adekola and Ibrahim Chatta. Funny enough I did not hate or like Lateef I was indifferent about him but when it was time to shoot my 2nd movie and we needed to feature him and after seeing his movie I agreed to have him on set. After his first scene, I fell in love with his brand.

How did you get your stage name MO Adebimpe?

That was from my modelling days and that is also my Instagram handle.

READ ALSO: HOW PERO ADENIYI FELL IN LOVE WITH TUFACE IN 2005

How PERO ADENIYI Fell In Love With TUFACE In 2005