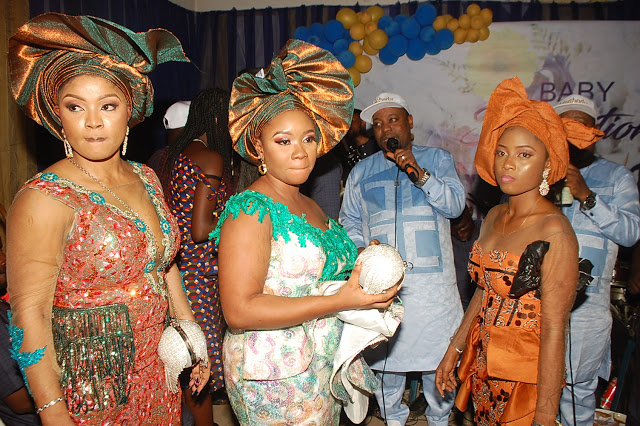 It turned out to be a big party, a star-studded party, which played host to A-list stars in the industry such as Odunlade Adekola, Mercy Aigbe, Bimbo Oshin, Ibrahim Chatta, Afeez Abiodun, Laide Bakare, Mide Martins and a host of others.

The venue was beautifully decorated in Blue and Gold with so much to eat and drink, despite the turn out of a huge crowd, that was never planned for.

One could easily mistake star actress & movie producer Seyi Edun, as the mother of the baby. She was on her feet allthrough the party, making sure everything went well, and the guests were properly taken care of.

She took charge of everything and really proved, she was indeed, Zion’s Second Mummy.

The party had one aso-ebi on display an orange-stoned lace, which most of her colleagues and close friends put on.

City People’s Senior Showbiz Reporter, BIODUN ALAO, brings you the gists from the star-studded party, which took place at the City People Event Centre at Gbagada in Lagos  on Sunday 29th 2019.

Beautiful actress, Wumi Toriola and her husband got married in May, 2018, after months of courtship, and in October, 2019, the couple welcomed their first baby, which they named Zion Fajobi.

For those of you who don’t know much about the couple, Wunmi is one of the wave-making actresses in the industry. She joined the movie industry in 2009, after getting a Certificate from Odunfa School of Performing Arts. Wunmi is often described by close friends as a down-to-earth person, free spirited being, who is equally playful. Besides, she is a no nonsense actress. She is one actress that showed her baby bump all-through her pregnancy period, even when fans were against it, she didn’t care. That is to show you, how free and care-free Wumi could be, and this explains why lots of people love her so much in the industry, and her delivery was one of the highly celebrated event in the Yoruba movie industry in 2019.

And Wumi’s husband is a very reserved and quiet person and their love could be described as a match made in heaven. Despite being married to a celebrity, he has been able to adapt to the celebrity life style and this has made them to peacefully  co-exist without any unnecessary drama.

Many described Wumi as a goal getter, vision-oriented lady, she achieves everything she always aim, at which obviously is every man’s desire in a woman and this definitely has kept the relationship going and waxing stronger.

With the way the baby’s dedication party went, one could easily tell that the couple understand each other, and their love is worth admiring.

Beautiful actress, Seyi Edun, popularly known as “Shai”, and wife to popular movie actor, Adeniyi Johnson, has maintained a very cordial relationship with Wumi Toriola for some years now. They do practically everything together and support each other all the time. Their relationship is one of the most envied friendships in the Yoruba movie industry.

Seyi always uses every opportunity to prove the worth of their friendship. She was up and doing at the baby’s dedication, she practically took charge of everything. From the seating arrangement to feeding and every other thing, she was busy more than any other person at the party. The actress equally looked gorgeous in her orange aso-ebi.

Popular comic actor and compere, Sola Olaibi popularly known as Officer Gaji and Tokunbo Manis anchored the party. They did justice to the event, as they kept throwing lots of jokes to literally crack guests’ ribs,  there was no dull moments with these two talented stars. Guests kept laughing and begging for more jokes. The guests actually had a funlfilled day with the two.

WUMI’S SIBLINGS FLY IN FROM U.S. TO SUPPORT THEIR SISTER

Wumi Toriola is from a family that is closely knitted. That explains why all her siblings took out time to be part of their nephew’s special day. They equally stormed the party in company of their friends from the U.S. They all danced with their sister, and also helped out, during cutting of the cake for baby Zion.

AN ORANGE-STORMED ASO-EBI ON DISPLAY

Most of the celebrities, who stormed the party, were dressed in an orange lace aso-ebi, which was the aso-ebi for the party, Trust Nollywood stars, they tried to outdo one another in their different well designed aso-ebi. Their different designs showed their class and taste.

Other guests, such as Wumi’s friends and some family members equally looked beautiful in the orange lace aso-ebi. But one couldn’t help but admire the ageless Bimbo Oshin, the beautiful Mide Martins and her best friend, who all looked gorgeous in the orange lace.

THE VENUE BEAUTIFULLY DECORATED IN BLUE AND GOLD

Were you told that Wunmi only planned to play host to 100 guests for her party at the City People Event Centre? But she ended up hosting over 500 guests. Guess what, despite the large turnout of guests, there was still more than enough to eat and drink, and even take home. And one of the side attractions for the day, was the well-decorated venue. The venue was beautifully decorated in blue and gold and one could not help but admire the decoration.

According to the M.Cs  the rich don’t struggle with prayers, they are always brief and also go straight to the point. That was exactly what Mr Fajobi did, as he was called upon for opening prayers. He went straight to the point, and made his prayers as brief as possible, which the MCs appreciated to save them time.  The elderly man was dressed in a pink colour native, and he equally took his time to greet people and appreciated them for honouring their invitations.

ADEGBODU TWINS ON THE BANDSTAND

Popular Gospel musicians, Adegbodu Twins were on the bandstand, dishing out nicely selected tunes. They thrilled guests with their exceptional performance as celebrities took turns to dance and spray them money.

They were equally one of the side attractions at the party. They left no stone unturned at the party, as they were really at their best, doing exactly what they know how to do best.

Delectable actress, Bimbo Oshin is one of the veterans that is highly loved in the movie industry. She equally supports her colleagues in the industry, both young, old and her contemporaries. She stepped out for the party, looking ageless and gorgeous as ever in her orange lace aso-ebi. She also had a nice time, as she was seen mostly on her feet dancing to the music supplied by the Adegboju Twins.

Popular actress, Tawa Ajesifini, who maintains a very cordial relationship with Wumi Toriola and Seyi Edun and now in America could not make it to the wedding, but fully represented by her husband. He came in company of his friend, and they both looked good in their blue native outfits. They came  on time and celebrated with the Fajobis before taking their leave and the musician couldn’t help but sing their praises all through, party.

WUMI CHANGES INTO TWO BEAUTIFUL OUTFITS FOR THE PARTY

It was her baby’s dedication, so it was more or less, her special day too. Though her friend, Seyi, took charge of things, she was equally on her feet to contribute her quota as well to the party. At the beginning of the party, she spotted the aso-ebi for the party.  Later on, she changed into a well-designed green-and-silver sequince lace. Wunmi is blessed with a very beautiful shape so she always stands out with her different styles.

Odunlade Adekola is one actor that commands a lot of respect in the entertainment industry. He is equally loved by fans. Immediately, he stepped into the venue, everybody wanted to snap selfie with him, and do you know what? Despite the large number of fans who wanted to take a photo with him, he took his time to please everybody, before he eventually left. He added so much fun to the party with his usual jokes and personality.

The talented actor also sprayed Wunmi endlessly, as the musician sang his praises.

Popular actress, Mide Martins and best friend, the CEO of Zanzee Beauty and Spa Place, stepped into the party together, looking gorgeous as ever. And their outfits were designed by her. They were also in company of Mide Martin’s husband. a well respected movie maker in the Yoruba movie industry, Afeez Abiodun. They all sat together and enjoyed every bit of the party together.

Delectable fashionista and actress, Mercy Aigbe, stormed the party in company of her cute son Juwon. She looked beautiful in her distinct outfit and the musician used half of the day singing her praises as she rained naira on Wunmi. Besides being a fashionista, Mercy Aigbe is a hot stepper, and she displayed lots of dancing steps, while spraying money.

BETWEEN BIMBO OSHIN AND SEYI EDUN

These two beautiful actresses maintains a very cordial relationship and they often refer to themselves as mother and daughter. Many also believe they share resemblance. These two went into serious dancing competition at the party, guests could not help, but admire them.

Besides movie stars who graced the occasion, the Corporate Picture’s boss also led lots of many marketers who came in good number to honour Wunmi Toriola on her child’s dedication party.

No doubt, Wunmi is loved by a lot of her colleagues in the industry, despite planning a small party, she was surprised to see the turn-out of a large crowd that honoured her at the party. Among guests, stars were Odunlade Adekola, Bimbo Oshin, Ibrahim Chatta, Mide Martin, Afeez Abiodun, Mercy Ebosele, Yetunde Barnabas, Sunny Alli, Alex Onigbele, Mercy Aigbe, Gaji, Laide Bakare, Yomi Fabiyi, Allwell Ademola, Mustapha Sholagbade, Aaolat, Adebayo Tijani and a host of others graced the event.