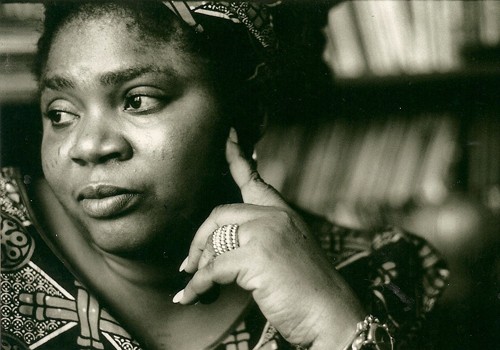 When you talk of Waka music, one name that readily comes to mind is Queen Salawa Abeni, although the music was popularised by Batile Alake years back before Queen Salawa came on the scene. For those who don’t know, lets quickly tell you that Waka is an Islamic influenced traditional Yoruba music style which is a much older genre than Juju and Fuji. Queen Salawa Abeni came and redefined Waka.

Queen Salawa Abeni Alidu, the undisputed Queen of Waka music in Nigeria. An Ijebu woman from Ijebu waterside in Ogun state, she has been at it for 44 years, since 1974. She was then aged 15, an age when many young people her age were still under the care of their parents. She began her professional career in Waka music when she released her debut titled Late Gen. Murtala Ramat Mohammed, in 1976, on Leader Records. It became the first recording by a female artist in Yoruba music genre to sell over a million copies in Nigeria. Salawa Abeni continued to record for Leader until 1986 when she ended her relationship with the record label owner, Lateef Adepoju.  She married Alhaji Kollington Ayinla and joined his record label, staying with him until 1994.

So good is Salawa that she was crowned the Queen of Waka Music by the Alaafin Of Oyo, Oba Lamidi Adeyemi in 1992. Her story is an inspiring one as she tells City People Publisher, SEYE KEHINDE her story.

My late mum is from Ibeju Lekki in Lagos. My mum’s dad is from Ilesha. My mum married from Ogun State. My dad is from Ijebu at Odo Omi, Ogun State. But we were all born in Lagos, we used to go home for Ileya.

How did your dad take your going into music?

My first album was 1976 for late Murtala Ramat Mohammed. That I went into music is by destiny. My destiny. A lot of my siblings have gifts of music but my dad didn’t let them sing. My elder brother wanted to sing Apala my dad didn’t accept.

My senior sister wanted to sing waka also, my dad didn’t allow it.  But in my own case, he did everything to stop me. He beat me. He scolded me, I didn’t stop. I refused. I kept going. He was surprised. He reported me to people but he was told to leave me alone. All his efforts to stop me failed.

But it wasn’t easy at all. It was a big battle I had to go into prayers, heavy prayers to survive it. I had to win the battle at home for my dad to allow me, then in the industry. I had to pray to survive also. The opposition was stiff.

Once, I went to play in Ijebu with late Mama Batini Alake. I was so small then. Once I came down from the car, everyone started to should. Hee! Salawa Abeni is here. Salawa ti de.

Salawa ti de oo. Mama was already singing. I started my music by standing up to sing. I didn’t used to sit down. You know I am young and full of life. As I was about to open my mouth like this. I couldn’t sing. I couldn’t talk. It was in Ijebu Waterside. Those who invited me immediately knew what was going on but I didn’t know. They took me inside gave me water, some were praying for me. Some said they hope it is not what they are thinking. They told me they must make sure I sing that it will be a shame for me to come all the way to their town and not been able to open my mouth to sing, that it will be a big shame.

At a point I just started coughing, and thick blood began coming out. So I coughed it out and I became ok. I now got on stage to sing, rain now started, heavy rain where mama was, Haa! It was a tough one that day ooo. It was raining in the other half of the field and it didn’t get to where I was playing.

It was very mysterious. Things like this are what my father thought about that made him to oppose my going into music.

When he was going to Mecca he called me to talk to me. He said he was going to Mecca with his friend who prevailed on him not to let me sing. He begged for forgiveness. I was embarrassed I understand why he didn’t want me to go into music. Yes. I was small then. But I was determined ooo. I am not usually scared of things ooo. I don’t get easily afraid. I went through a lot. Several accidents. Several mishaps. I had an accident in 1997 along I begun. Many people were wounded. I was wounded. They had to pull me out of the carnage. I had a deep cut on my Nose. Nigeria was still good then. I was taken to General Hospital that night. I got treatment. It was stitched. They treated my right hand. Once I was ok, I told them to let us go ahead and perform.

When you started were there elderly people you looked up to?

When I started off, I was with those I was living with. After a while, the issue of their wanting me to marry came up. They wanted me to marry our Baba Egbe. I didn’t like the idea. They wanted to cover my star. Why were they bringing up the issue of marriage at the time my star was shining, I wondered. I said No.

That was how I got to know late Alhaji Barrister and KSA. Those were the first people I got to know. We got close. Then Obey Miliki. They were all praying for me. They saw me as a mysterious child. They said Abami Omo ni eleyi o. This little girl. They were supportive for me. Alhaji Barrister really took care of me, then. He and D Director were friends. He did the child naming of Ahmed the first born of D. Director.

Why did you decided to sing Waka at that early age?

That was the kind of music we used to hear in that village, when we gather to play at outside, whenever the moon comes out we call it Ere Osupa. There was one man with radio. And there was this programme they do every night. Once that programme starts I will more close to the mans windows to listen. One day I just decided that I want to start singing Waka, but I will change the tune to suit my own style.

There is no song I can’t sing. And there is no voice I can’t imitate. I am blessed with that Yes. So, that is how I started small. After my mum, who was a bit ill, now got better?

Do you have any regrets that you took to Waka music?

ind yourself in that situation you will take it as such and say this is my cross I have to bear it. This is also my career. I have to balance the two. I have to talk to my kids because their parents are legends. They are the children of Kollington and Salawa. They should not be arrogant. They should not carry it on their foreheads. I am begging them. They have to read and go to school. They all have to have the minimum of 1st degree. I am lucky many people rallied round me to help me as a single parent. Lateef Adepoju was my late sons father, my siblings appreciate me a lot. My sisters, my brothers don’t joke with me. I reall miss my mum. I was close to her.

Tell us about your albums?

I have a lot of albums. Many of them are oldies. My volume one, Ibilere, Iba Agba, Eni ba sun ko ji, all under Leader Records, 16 LPs. Being a young girl at that time really affected my growth in music. I was naive then. So, I was being tossed around like a ball. From Leader Records I moved over to Kollington Records. I did some albums. I did Kolawole ni mo ba lo. I did Iba Agba, Eba mi be won Eje kin raye setemi. I did more than 16 records. Then, I did Beware, Welcome from America for Gbenga Adewusi. I did like 5 for Sony Music. I did for Joel in Abeokuta. I did some for Alagbada Records, like 6. I did Experience, with Alagbada. There is one album that really boost my career is Gentle Lady. Then Cheer  Up, Good morning in America. Waka Carnival. I did like 6 with Alagbada.