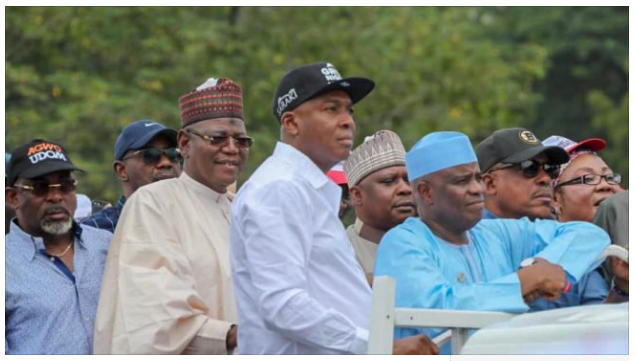 Deputy National Publicity Secretary of the All Progressives Congress, APC, Mr. Yekini Yekini Nabena, has insisted that the party’s decision on the selection and zoning of principal officers for the incoming 9th National Assembly is supreme.

Nabena stated this while speaking with newsmen on Wednesday in Abuja.

He said that the party’s decision must be respected by its legislative caucus and opposition lawmakers in the National Assembly.

He, therefore, cautioned the outgoing President of the Senate, Dr Bukola Saraki and Speaker, House of Representatives, Yakubu Dogara to steer clear of the leadership in both legislative chambers, NAN reports.

“The APC has learnt its lesson from the outgoing National Assembly when impostors masquerading as party men sabotaged our party and hijacked our mandate; affliction shall not rise up the second time.

“The efforts by the Adams Oshiomhole leadership of the party are commendable in achieving a fair selection and zoning arrangement that appeals to a greater section of the party stakeholders.

“APC has overwhelming majority in the National Assembly and has a legitimate right to make its choices on the selection and zoning of principal offices.

“The APC family is in agreement on the party’s supremacy and the Peoples Democratic Party (PDP) and other opposition parties should focus on their minority positions,” he said.

According to Nabena, the outgoing President of the Senate, Bukola Saraki, Speaker Yakubu Dogara and the PDP NASS caucus have been moving from pillar to post to frustrate the plan of APC.

He said the PDP had a hidden evil plot to interfere in the emergence of incoming National Assembly leaders.

Nabena said that the APC was aware of the scheming by Saraki, Dogara and the PDP caucus to interfere with the emergence of the incoming National Assembly leadership.

“Their plans are bound to fail as the APC is a strong party with unity of purpose,” he said.