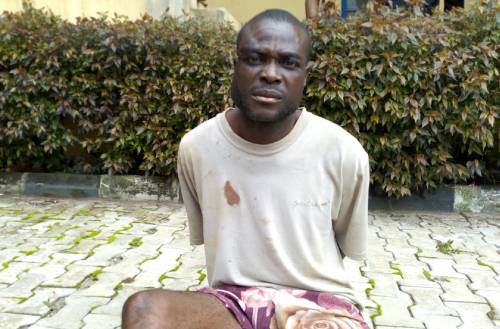 Akunwumi Akinmolere, a manager with a Cocoa Multipurpose Union in Ondo, has been hacked to death.

Akinmolere was killed on Wednesday by one of the contract staff with the Union, identified as Adewale Adegoroye in Akure.

The deceased was stabbed to death by Adegoroye following a hot argument over an accumulation of unpaid salaries.

The Police in Ondo State confirmed the gruesome killing of the 60-year-old to reporters on Thursday evening.

Femi Joseph, the spokesman of the Ondo State Police Command, noted that the culprit stabbed his boss, adding that Akinmolere died at the State Specialist hospital Akure as a result.

“We got wind of the information on August 1 that the manager went to the bank to withdraw some money and one of his staff trailed him home. On getting to the house, this staff fought with his boss and stabbed him to death with a cutlass,” Joseph said.

“After stabbing him, the culprit stole the money and jumped the fence of the house after committing the crime. But he was seen by neighbours in that vicinity and was arrested and brought to the station.”

In his confession, Adegoroye said he stabbed his boss in the stomach but claimed it was “accidental”.

The 42-year-old culprit noted that he had been working since September 3, 2017 without any pay from the manager who brought him from Lagos to work in Ondo.

He claimed that the manager refused to pay his accumulated salaries till date, despite working as an assistant storekeeper in the cocoa company.

“The manager employed me since last year September, and since then he has refused to pay my salaries” he said.

“I went to his house on Wednesday to inquire about my salary because I have no money to eat but instead he told me there was no money. Later, his wife called and gave me N500 to eat and while leaving their house, I immediately saw him with money and asked him to pay me.

“But he refused and I told him to his face that it shows he was using me as a slave. An argument ensued, and he slapped me. I saw a cutlass in the house, drew it and used it to stab him and took the money I saw. But while I was leaving the house, some people accosted me, beat me up and took me to the Police.”