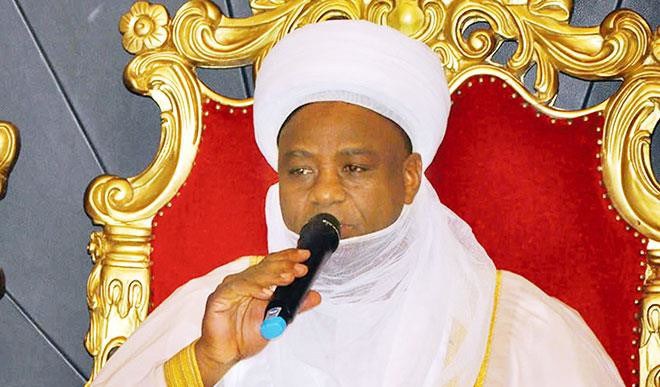 The paramount ruler of the Nothern Nigeria, Sultan of Sokoto, Sa’ad Abubakar, said on Thursday that the traditional institution was in support of the recent move by the Federal Government to criminalise hate speech and fake news.
The Sultan, who stated this in Abuja at the Annual Lecture Series and 25th Anniversary of the National Broadcasting Commission, NBC, added that hate speech should be declared as terrorism offence.
He said that the traditional institution was in support of the recent declaration by Vice President Yemi Osinbajo as Acting President that “none will be allowed to get away with making speeches that can cause sedition or that can cause violence’’.
The monarch said that the phenomenon of hate speech and fake news had reached an alarming state and decisive action should be taken by the government.
The monarch said he was a victim of fake news only on Wednesday when he was misrepresented at a Nigerian Labour Congress event in Abuja that “he kicked against Restructuring’’
He clarified his position at the event that he was only against any restructuring that would lead to the disintegration of Nigeria.
The monarch said that he was also shocked by a Television station report which claimed that there was “fracas” at the same event.
“Shortly after the event, many people were calling me that what was I doing at the event where there was “fracas’’.
“There was nothing like fracas at that event as reported by a popular TV station which I will not name here.
“A former comrade governor who was at the event canvassed a position which did not go down well with the audience and people were shouting.
“The President of NLC waded into the situation and the Comrade Governor continued with his speech.
“At the end of the speech the former governor was given a loud ovation. So, how can that, be described as fracas,” he said.
The monarch said he was shocked to see news report on the event with the headline, “Restructuring, Sultan kicked, Oshiomhole booed’’
The monarch said that the freedom of speech as enshrined in the Constitution should not be used to violate other people’s rights.
He also decried a recent development where President Muhammadu Buhari’s health condition was politicised and made to generate hate speeches.
He called on political and religious leaders at all levels to guide their utterances and condemn hate speeches.
Hamza Al-Mustapha, the former Chief Security Officer to late Head of State, Sani Abacha, also decried the alarming rate of hate speech.
He said although the phenomenon was not new, government must be decisive in addressing the trend.
Mr. Al-Mustapha said there was international dimension to sponsorship of hate speech especially by those who had seen the potential of Nigeria.
He said local collaborators were being recruited as merchants to use fake news to subvert the nation.
Mr. Al-Mustapha, therefore, called on NBC to create synergy with the international intelligence community in addressing the challenge.
He also called for regulation of the review of only front pages of newspapers in the television and radio station programmes.
Mr. Al-Mustapha said that knowing well that the review attracted large follower-ship, sponsors of hate speech messages will always ensure that their stories are published in front pages while developmental news are tucked inside the papers.
He charged the media organisations to wake up to their statutory responsibilities and shun act that will disintegrate the country.
(NAN)