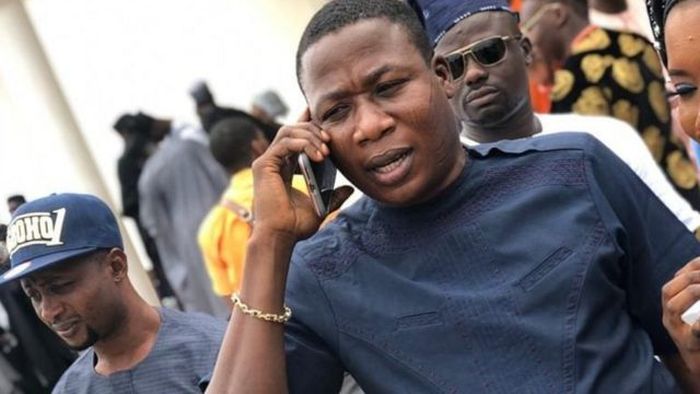 Chief Yomi Alliyu SAN, counsel to Chief Sunday Adeyemo aka Sunday Igboho, has confirmed that the Yoruba Nation agitator is still in custody in Cotonou.

This is contrary to the rumour flying about that Igboho has been released and granted asylum in the United Kingdom.

According to Chief Alliyu, the Yoruba activist is rather going through harrowing torture and pains, having been put in chains in a police cell in Cotonou, the capital of the Republic of Benin.

He said Igboho is being treated like an animal in the cell “based on an order from the above”, adding that he would appear before a court tomorrow, for an extradition order.

The lawyer made this disclosure Tuesday evening while reacting to the insinuation that the Yoruba activist who was arrested in Cotonou on Monday night has since been extradited to Nigeria.

It would be recalled that Sunday Igboho was arrested at the airport, reportedly to board a plane to Germany, along with one of his wives who is based in the European country.

Alliyu said that, as at Tuesday evening, he was informed by a police source that Igboho has been put in a painful condition and subjected to torture as his legs and hands were allegedly tied like an animal.

“Just about three minutes ago, I got a call from a reliable source from the authorities in the Republic of Benin that Sunday Igboho has been put in a very dehumanising condition in a police cell in Cotonou.

“The source told me that they are under instruction by an order from the above that Igboho should be chained like an animal waiting to be slaughtered. He told me that Igboho was tightly chained to the floor and he is in serious pains.

“While I was talking to the source on the telephone, I can hear our client crying and asking that the chains should be removed and that he is pains. But he was told that they cannot remove the chains as they are acting on instruction,” he said.

Alliyu, however, restated that the extradition order being sought for by the Nigerian authorities may not likely sail through, given the status of Igboho as a political offender.

“I know that our client, Chief Sunday Adeyemo (aka Sunday Igboho Oosa), would be taken to a court in Cotonou, the capital of the Republic of Benin, tomorrow, Wednesday.

“The Nigerian authorities and security operatives that arrested him would be approaching the court for an extradition order to bring Sunday Igboho back to Nigeria.

“But it is not likely that the extradition order being sought for would sail through. This is because of the status of our client as a political offender who enjoys immunity against extradition.

“Like I said in a press release earlier today, even his arrest by security operatives was against the political nature of his offense.

“There is an existing extradition treaty between four West African countries, including Nigeria, Togo, Ghana and Republic, which grants Igboho immunity from being extradited from the Republic of Benin.

“The Extradition Treaty of 1984 between Togo, Nigeria, Ghana and Republic of Benin excluded political fugitives. It also states that where the fugitive will not get justice because of discrimination and/or undue delay in prosecution, the host country should not release the fugitive.

“Article 20 of African Charter on Human and Peoples Rights to which the four countries are signatories made agitation for self-determination a fundamental right to be protected by all countries,” he said.