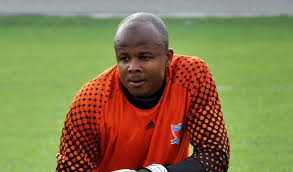 Super Eagles goal keeper Ikechukwu Ezenwa hopes to be fit for the international friendly game against Poland and Serbia.

The Enyimba  goal stopper sufferd an injury to his knee after a collusion with team mate stephen Eze, which ruled him out of the final of the just concluded 2018 African Nations Championship(CHAN).

The Home-based Eagles lost in the final by 4 – 0 to host Morocco, while Ezenwa as captain could only look from the sidelines.

The shot stopper has confirmed that he should recover in time for the Super Eagles first team friendly matches.

He revealed so in an interview with Complete Sports, “I have started training with my personal fitness trainer and I hope to get back on the pitch before the end of the month,” Ezenwa said

Super Eagles handler, Gernot Rohr was pleased with Ezenwas performance at the continental tournament and will hope the goal keeper recovers in time before the scheduled matches.

The Super Eagles take on Poland on Friday, March 23 in Wroclaw and then play against Serbia on Tuesday, March 27 in England.

Nigeria are grouped alongside Croatia, Iceland and Argentina for the upcoming 2018 FIFA World Cup in Russia.