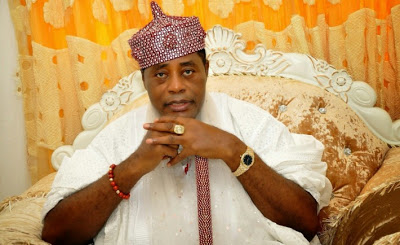 The Secretary General, Council of Yoruba Obas, Oba Aderemi Adedapo, has described the Olugbo of Ugbo Kingdom, Oba Fredrick Akinruntan, as a rabble rouser and an attention-seeking monarch for declaring himself as the leader of all Yoruba Obas.

Olugbo had while speaking at an event in Ibadan, the Oyo State capital, on Sunday, said, “I am the leader of all obas in Yorubaland. I speak with thunder in my mouth and I make bold to say so. No one is above me in Yorubaland inasmuch as it has been accepted that we are from Ife. I am the one that Oduduwa met at Ife. We are the husband of Moremi Ajasoro.

Anyone who wants real Yoruba blessing should approach me. I am the one bestowed with the power.” Asked which of the various historical accounts of Yoruba land was authentic since his own version was the latest in the series, the Olugbo said his account was most accurate.

“They don’t want the true story of their fathers to be told. Slaves don’t want history to be told. I am bold because I am not a son of a slave. My book is there. Obafemi Awolowo University, Ile-Ife, has accepted the book as the authentic history of the Yoruba race. I am about to publish another book on the same subject.”

But Oba Adedapo, who is also the Olojudo of Ido Osun, said the Olugbo’s claim was untrue.

Adedapo  said this while speaking with one of our correspondents in Osogbo on Monday in his reaction to the claim of the Olugbo.

Oba Adedapo said no one could rewrite history of the Yorubaland now in order to suit his purpose, saying the Ooni of Ife remained the leader without any controversy.

Oba Adedapo, who is also the Coordinator, South-West Council of Traditional Rulers, said the late Ooni, Oba Okunade Sijuwade, was  highly instrumental to Oba Akinruntan’s ascension to the throne.

He said, “Oba Akinruntan is an attention seeker. He is a rabble rouser, he deserves no response but some people especially outside the country may tend to believe his claim if he is not corrected.

“His utterance is part of royal rascality we are talking about. Does he want to rewrite history or what? Nobody can rewrite history. The late Ooni Sijuwade made it possible for him to become the Olugbo.

“He must withdraw that statement within the next 96 hours which is four days. What he is saying is abominable in Yorubaland.”

The monarch said Olugbo was not part of the 54 Yoruba Obas with original crown, saying he was using various tactics to draw attention to himself.

The Alake of Egbaland, Oba Adedotun Gbadebo, when contacted on the supremacy claim by Olugbo of Ugboland, was said to have travelled to Lagos.

His media aide,  Baaroyin Lai Labode, said the monarch was out of town.

He said he would need to brief him on the issue when he returned from the trip.

He said, “Kabiyesi has travelled to Lagos, and until he returns. I need to talk to him on the issue, whether or not he will want to comment on it.”

Also, the Olu of Ilaro and paramount ruler of Yewaland, Oba Kehinde Olugbenle, said he would not comment on Olugbo’s claim.

The personal assistant/media aide to Oba Olugbenle, Bolaji Leigh, while reacting to the issue on behalf of the monarch, said, “Good day my brother, Kabiyesi will not comment on that.”