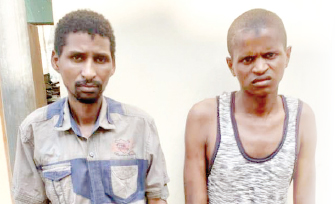 Two members of a notorious kidnapping gang who took part in the 2018 abduction of four American and Canadian expatriates, working in Kaduna State have given details on how they were able to successfully abduct the foreigners during their attack in January 2018.

The suspects identified as Abdulmumin Adamu and Usman Abdulahi, alongside their other fleeing members, had in January 2018, abducted four expatriates along Kwoi-Jere Road in Kagarko Local Government Area of Kaduna State.  They were two Canadians identified as Nate Vangeest and a woman, Rachel Kelly while the other two who are Americans were identified as John Kirlin and Dean Slocum. The victims had visited Kafanchan and Kaura to inspect an ongoing project, but were ambushed on their way back. The kidnappers killed their military escorts and abducted them. They reportedly demanded a ransom of N100 million from the government before the victims were released.

After much investigations, the Nigeria Police located and stormed the gang’s hideout situated inside a deep forest in Kuiere near Kagarko Local Government area of Kaduna State.

When interrogated, the suspects recounted how they were able to successfully carry out the attack with the aid of an informant that knew the itinery of the victims. The suspects told the police that they were nice to the victims during their stay in their hideout.

One of the suspects, 20-year-old Adamu said he was a farmer before joining the kidnapping business of his former boss, Dogo. Adamu said he abandoned farming and cattle rearing because of the Fulani herdsmen that were forcefully collecting their cows from them. The married father of one, said he turned to kidnapping just to make some money that will enable him take care of his wife and child.

On the kidnap of the expatriates, Adamu alleged that the plan was to kill anyone who dared to stop them.

“Dogo assembled us to get ready that ‘oyibo’ people are coming. We attacked the expatriates along Jere Road at the Southern Kaduna area of the state and an informant gave us the job. We were nine persons that took part in the attack; five of us were armed with Ak-47 rifles, while four of us were holding sticks. I was holding a stick, while the people who had guns were in front and when the vehicle got to where we were those with guns started firing and they forced the vehicle conveying the expatriates to a stop.

“We killed two policemen, took away their rifles and kidnapped four white people, two of them were Americans, but I don’t know the nationality of the other two. We took them into the bush and trekked all through the night until we got to the camp in Kuiere.  The expatriates spent three days with us in the camp and we fed them with rice and beans and they ate three times daily.

“We also gave them bottled water to drink because they were white people. One of our gang members who understood and speaks English language correctly contacted the people that paid the ransom. I don’t know the amount he demanded, but I suspected the amount was around N100 million, but I don’t know the exact amount that was paid.  I got N5million as my share after the ransom was paid. I bought some cows with my share of the ransom and they are presently with my brother in my village.

“I was arrested after the police burst our camp and I fled to Kano State. I was in Kano State to visit my friend and I didn’t know that the police were on my trail and I was shocked they caught me in my friend’s house.”

He denied killing the police orderlies.

“I was carrying a stick that day. It was God that saved me that day because those policemen refused to hand over the Oyibo people. They were shooting at us seriously but we were many and heavily armed.  If they were wise, as soon as they saw us, they will abandon the vehicle and run. I was very nice to the Oyibo people and even gave them water to bath. Normally we rape the women but nobody touched her. You can ask her about Adamu, I know she will tell you that I was nice to her” he said

Suspects who kidnapped 4 expatriates and killed their orderlies arrested was last modified: June 2nd, 2019 by Reporter