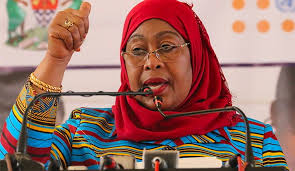 History is being made in Tanzania today as Vice President Samia Suluhu Hassan was sworn in as the first female president of the country after sudden death of President John Magufuli.

The new president of the East African country was dressed in a black suit and red headscarf before dignitaries at a swearing in ceremony held in the country’s capital, Dar es Salaam.

In her first public address as president, the 61-year-old Hassan declared 21 days of mourning for Magufuli and public holidays on March 22 and on March 25, the day the late president will be buried.

She went further to seek the support of the people towards achieving a new Tanzania.

“It is not the time to point fingers at each other but to hold hands and move forward to build the new Tanzania that President Magufuli aspired to.”

Hassan ascended to the presidency after President Magufuli’s death due to heart disease which was announced on Wednesday, more than two weeks after he was last seen in public.

Magufuli’s absence since February 27 had fuelled speculation about his health and sparked rumours he had contracted COVID-19, although officials had denied he was ill.