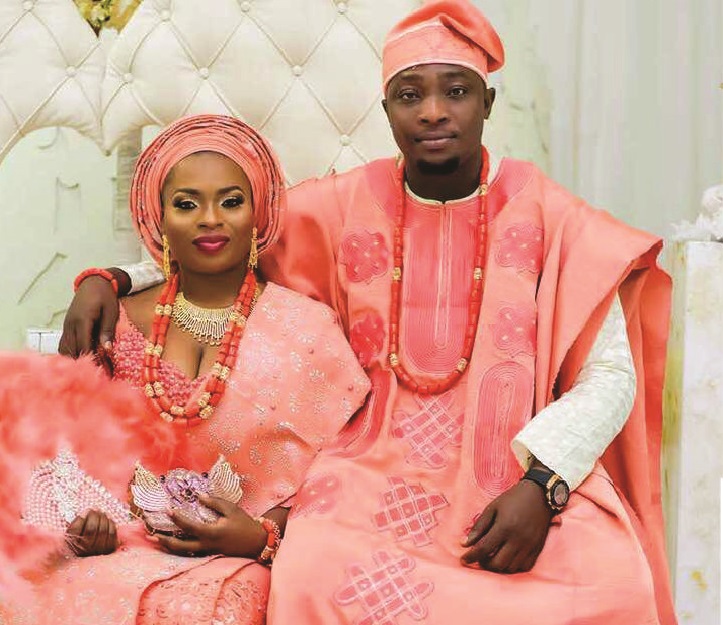 It was an excitement moment at Brooks Park Event Center, Olubadan Road, Alafin Avenue, Oluyole Estate, Ibadan on Saturday 9th, December 2017, when respected boss of Tasman Prince Temitayo Adeolokun’s son, Abayomi Oluwaseun asked for the hand of Sholape Adejoke, a UK based Nurse in marriage. It was the introduction of the 2 families and Engagement ceremony. Though, the event had few  celebrities in attendance but a lot of business tycoons and big boys rocking the social scene  came to celebrate with the couple. City People GBOLAHAN ADETAYO was at the event and he serves you gist of all that went down at the event.

The marital vow between the youthful couple was  witnessed at Brooks Park, Oluyole Ibadan. The hall  was decorated in all white with touches of cream colour. The walk way to the podium that seated the 2 families had a decoration of white and green leaves which added colour to the already colourful event.

Unlike other wedding parties where purple or pink will dominate the venue, it was a different concept at this beautiful occasion. Attending the event, you may think you were at a peace meeting as the family of the bride were clad in green colour attires with a touch of white. The groom’s family also matched it  with all white and mint green caps for men and headgear for women.

INTRODUCTION AND ENGAGEMENT PROPER KICKS OFF

Though the introduction of the 2 families and engagement which was initially slated to hold by 10:00am started a little bit behind the schedule but the officiating officers in charge {Alaga Iduro} really managed the time. The segment took a while as the groom was first ushered in  a company of his friends who were all adorned in a fitted all white agbada.

If you are single and you were at the event when the bride was ushered in by her friends, you will be eager to hastily woo a woman of your choice same day and walk down the aisle with her the following day. The bride majestically stepped into the venue with her well sewn pink attire, her face covered with veil. Her friends were on well sewn wine colour gowns that enhanced their shapes. They dazzled guests with different dance steps. Some were even carried away, thinking they were in a dancing competition venue.

Immediately after she was accompanied by her friends, the Alaga Iduro did the needful and officially presented her to the family of the groom. After this segment, she walked majestically to the altar and meets her husband.

Shortly after the bride joined her husband, the families’ introduction and engagement segment came to an  end. The bride’s father, Pastor Segun Morenikeji was invited to say the closing prayer, which he did.

Shortly after the engagement, the official band of the day, Kick Rhythm Band took up the control of  event as they kick started the show with series of melodious songs. The guests were busy catching fun with different sumptuous meals and choice drinks on the  table before them. After some hours, the MC for the reception took over.

Popular Yoruba Actor, Jide Adegbite was the official MC of the event. With him at the wedding ceremony, there was never a dull moment. This is because he gave a good account of the professionalism in him as he was cracking the ribs of the guests with several hilarious statements.

They are Pastor Segun and Bisola Morenikeji, they are from Ibadan, Oyo State, where they were both born and brought up. They lived in the city before the family moved to the UK years back. Her mum studied light designing while her dad is a  pastor.

The chairman of the occasion was Ayodele Adebo, a medical expert. He advised the bride to be submissive to her husband because ‘I don’t care attitude from’ women is one of the reasons many marriages don’t work out. He also told the groom to show more care for his wife. There is no how dispute will not occur but he should make sure that it doesn’t go beyond their bed room. Above all, they should love one and another more.

DAYO SOLARU AND WIFE STEP OUT

Lagos Big Boy, Dayo Solarun and his beautiful wife, Folake stepped out at the wedding like no other.  He was spotted seated like a gentleman on his seat. He was clad in all white attires while his wife glow in green outfit.

WALE MATANMI, ALHAJI LUKMAN, OTHERS COORDINATED THE CUTTING OF THE CAKE

The cutting of the beautiful wedding cake was coordinated by Alhaji Wale Matanmi, Mrs Adeolokun, Alhaji Lukman and Alhaji Soara.

COUPLE GO ON The DANCE FLOOR

Prior to the cutting of the cake, the groom gave the vote of thanks and also prayed for the safe trip of guests  back to their various destinations. Himself and his wife opened the dance floor as they were invited to dance to the invited artiste’s jamz.

When you have a grown up son who got married while you are still alive, you should be happy. So I am full of happiness today. I know in life, one wouldn’t allow his/her kids to marry someone who is of no value. To me, with the little time I have spent so far with the bride, I saw her as a gentle and easy going lady. I find it difficult to say my son shouldn’t marry her.

Coming from Oyo state has no meaning to me. I believe that the division of state or town is just a matter of infrastructure of making financial support to one person or the other. If I have to talk about culture, we are Yorubas, Oduduwa’s sons and daughters, years back, Ilesha and Oyo were one before it was divided and as we speak, my mum is from Oyo State.

So I see nothing wrong in him marrying from Oyo state. Her family was so happy to receive our proposal to take her hand in marriage. We pray to God to be with the couple always. Personally, I wanted the wedding to be as low keyed as it is. If you look at the band on stage, he is not like our everyday artistes.

I have a lot of artistes who wanted to perform here today but I don’t want noise because it has nothing to do with the marriage. What we are doing today is to just celebrate, and after today, it is how the couple will keep their happy home that will matter. That is what is more important not the party. So, I decided not to invite big artistes to perform or grace the occasion. As you can see, not everyone in the entertainment industry is big financially. Today, we have a lot of Business tycoons in the building who don’t blow their trumpets and that is exactly why I am making the wedding ceremony like this. I don’t just want to make any  noise.

I have done a lot of big parties that made noises here and there and that was for party sake but this one is to join the couple together. What we have on ground today as you can see, I mean food and drinks, guests can’t finish them. Not because we lack anything, we have more than enough but it doesn’t make sense to me to invite the whole world because of a wedding ceremony. Prayers for the couple to live long and enjoy their marriage is more important”.

“Why I Decided To Marry Abayomi”-Bride

The wife of the moment is no other than Sholape Adejoke. A UK based nurse who hails from Ibadan, Oyo State. She met her husband via one of his elder sisters in the UK known as Yemisi. She did the link -up and from there they started talking on phone for about 2 years before they finally formal used their relationship.

According to her, “after we were introduced, one party was more interested than the other. I needed to know him first, and getting to know him, I realized he is kind of gentle and very patient with me at all times. He is a very good listener as well; he cares about my well-being all the time. Being a celebrity’s son doesn’t really matter to me. I just met him as who he was and that is all. There is no airs of being a  celebrity when we are together in the family, we are all one. My meeting with him was God’s ordaining. I was not interested when we started talking because he lives in Nigeria and I live in the UK, because it is a long distance relationship. But the rest now is history.

He makes me laugh and I think that was the key. I was told that his dad is a celebrity initially but that was not the reason I accepted him, the most important is love. I fell in love with him because he is very caring. I partly grew up in Nigeria before I went to UK for my secondary and University education, I am now a nurse. I decided to be a nurse to fulfill my passion. I am passionate about caring for people especially health wise”.

“How I Met My Wife”-Groom

Today is a big day for me, so I am very delighted. I am based here in Nigeria and she lives in London. Everything actually happened as it has been destined to be. She was introduced to me by an aunty who works in the same office with her in London.

We got talking for more than a year and we started. She comes around until this fateful day when I said let’s make it real which has actually gotten to this stage. I am really happy. Talking of the side attraction, she is that kind of woman who makes things around her easy. She is soft in the heart. Let me say she is a very simple woman. She is ready to go a mile for you to be okay.

Fortunately or unfortunately, I have never had a reason to ask her for something but when you date someone, you should be able to study the person and her character, and the value she has to offer and all that. She is the type who is a source and a reason to smile when you are sad.  And that, as a person, means a lot to me and that is actually one of the things I look for in a woman.

On how we will balance our living together, we have been able to establish that in the last few years of dating. Sometimes, we feel that the space is there but trust me, once you love someone, you will wait. I am a sound engineer, I have passion for music but I studied Economics in Ife. It is something along the line I delved into because of my passion. My growing up was perfect because we had a much disciplined father. It wasn’t all the time rosy but we thank God”.