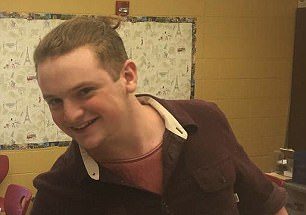 A teenager died from drinking caffeine too quickly after he consumed three drinks in under two hours.

Davis Allen Cripe, 16, drank a McDonald’s latte, an energy drink, and a large Mountain Dew in quick succession before collapsing at school in South Carolina.

Coroner Gary Watts said that physicians on his staff determined that Cripe died from a ‘caffeine-induced cardiac event causing a probable arrhythmia.’

However, he added that his death was not a caffeine overdose.

He added that had it not been for people seeing him drinking the high volumes of caffeine, the cause of his death is likely to have gone unnoticed.

‘This is not a caffeine overdose,’ Watts added: ‘We’re not saying that it was the total amount of caffeine in the system, it was just the way that it was ingested over that short period of time, and the chugging of the energy drink at the end was what the issue was with the cardiac arrhythmia.’

Davis weighed a little more than 14 stone, but would not have been considered morbidly obese, Watts said. He died about an hour after collapsing in a high school near Columbia, South Carolina.

Cripe may have had the same amount of caffeine on another day and been all right, Watts said.

‘We’re not trying to speak out totally against caffeine,’ Watts said. ‘We believe people need to pay attention to their caffeine intake and how they do it, just as they do with alcohol or cigarettes.’

The Mayo Clinic said in a March report that up to 400 milligrams of caffeine a day ‘appears to be safe for most healthy adults.’

According to caffeineinformer.com, a McDonald’s latte has 142 milligrams of caffeine, a 20-ounce Mountain Dew has 90 milligrams, and a 16-ounce energy drink can have as much as 240 milligrams

Teenager died after drinking huge amounts of caffeine was last modified: May 16th, 2017 by Reporter

8 Dos and Don’ts of Prenups